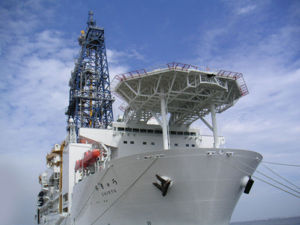 The "silica burp" hypothesis is a proposed explanation for a period of the Eocene epoch during which large quantities of biogenic silica were deposited on the seafloor. The hypothesis invokes changes in the supply of silicon to the ocean in conjunction with climate changes to explain these deposits, and these changes can be simulated, and the hypothesis tested, in the silicon-phosphorus model.

The Eocene epoch was a period of Earth history with enhanced crustal activity and a markedly warmer climate. In addition, there were prolonged periods during the Eocene when unusually large quantities of biogenic silica accumulated on the ocean floor. The peak of this accumulation occurred at approximately 50 Mya, forming what is known to paleoceanographers as Horizon AC, a layer of silica-rich sediments spanning approximately 4 My.
This layer is quite well known to those scientists who go out to sea on ocean drilling ships such as the Chikyu, because the hard layer is difficult to penetrate with their drill bits. To many of these scientists it is familiar primarily as an obstacle to research rather than as an interesting scientific phenomenon in need of explanation. However, Horizon AC is probably the largest silica deposition event during the last 100 My, so understanding the processes that formed it are of particular interest.
Because Horizon AC was not thought to be contemporaneous with any known processes which could have added silicic acid (dissolved silicate) to the ocean, a novel mechanism was proposed to explain it. This "silica burp" hypothesis suggested that climatic variation could allow a long time to pass between silicic acid supply and silicate burial (McGowran, 1989); they could be 'temporally decoupled'.

By comparing the contents of a large number of cores drilled down through layers of ocean sediments, it is possible to construct an estimate of how the particle rain to the seafloor has changed over geological time. One consistent finding is that there was a period of unusually high flux of solid SiO2; (known as opal or biogenic silica) to the seafloor about 50 million years ago that lasted for about 4 million years. This silicon-rich seam of sediment is known as Horizon AC, and a colourfully named hypothesis, the "silica burp", was developed by McGowran (1989) to explain its origin.
McGowran's "silica burp" hypothesis suggested that a sequence of geological and climatological events conspired to create Horizon AC. Firstly, a period of vulcanism known as the Thulean (56.7 to 53.8 Mya) added a large quantity of dissolved silicon to the ocean. Next, the warming climate of the Early Eocene Climatic Optimum (EECO) acted to decrease ocean circulation and increase stratification, with the result that silicon added by this vulcanism was isolated from the productive surface waters and was able to accumulate within the ocean interior. This build-up of silicon in the ocean was then compounded by the further addition of silicic acid by increased, climate-induced weathering at high latitudes. The warming of the EECO period persisted until approximately 49 to 48 Mya, after which major climate cooling occurred. This reinvigorated the circulation of the ocean, and, so McGowran's hypothesis went, released the accumulated silicic acid from the deep to the surface ocean, the "silica burp", where it fuelled increased biogenic silica production which led to the creation of Horizon AC.
Essentially, McGowran's hypothesis proposed that changes to the Earth’s climate around the period that Horizon AC was formed acted to decoupled in time the geophysical processes that supplied silicic acid to the ocean from the biological processes that acted to remove it.

Testing the hypothesis in JModels

The silicon-phosphorus model in the JModels suite includes a representation of the "silica burp" as one of its scenarios. This allows users to test whether the hypothesis is able to explain the formation of Horizon AC. The pictures below illustrate the steps to run this scenario using this model.

Description of the Eocene epoch

Description of the chemical element silicon

Diagram of the silicon cycle