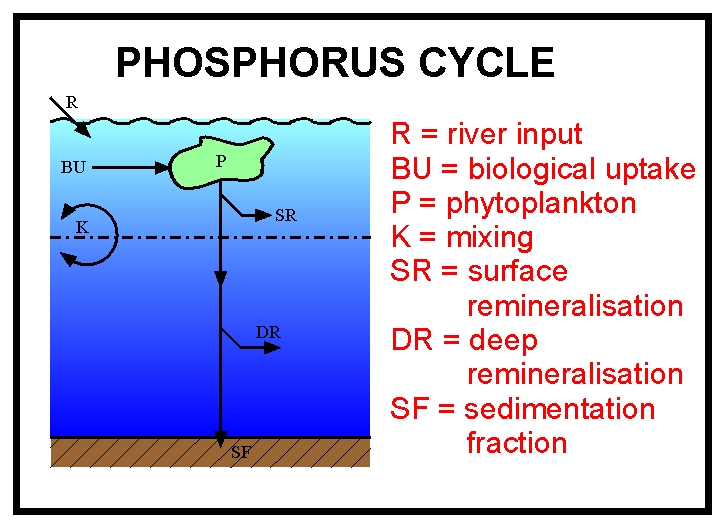 As with any model, simplification has both advantages and disadvantages. This article describes some of the phosphorus model pros.

In computer modelling there is a continuum between two caricature classes of models:
conceptual-type models that aim to simplify a system down to include only its most important elements, in particular those that govern its behaviour
simulation-type models that are highly detailed and try whenever possible to avoid making assumptions about what is important; instead they try to include as much detail as possible in the expectation that nothing important will be omitted
By simplifying to only the most important fluxes and state variables, this model is very much a conceptual-type model.

One of the key advantages of such an approach is fast run times. The most detailed (fine spatial resolution) simulation models can, at the extreme, take many months of real time to simulate only a few decades. In contrast, this conceptual model can simulate hundreds of thousands of years in only a few seconds.
Leading on from this, a second advantage is the ease of experimentation and sensitivity with the quicker models such as this one. If each model run takes many months then the ability to carry out many different runs in series is limited. This is particularly important where uncertainty in the model formulation favours large numbers of sensitivity runs.
Another advantage of simpler models is the ability to understand why the model produces a particular behaviour. This is much harder, and sometimes impossible, with very complex models. It is not always possible to disentangle the large network of interacting effects in a complex model in order to work out which one is key, whereas it is easier in a simple model.
This model of the phosphorus cycle include the quantitatively largest fluxes in the phosphorus cycle:


Some models are "closed-system" in the sense of forcing all substances to remain within the model ocean. Sinking material that reaches the seafloor, for instance, will be remineralised at the bottom (or top) of the ocean, and rivers will not be modelled. The boundaries of these models are absolute. This model is more realistic in the sense of being open-boundary (open-system). That is to say, it doesn’t just simulate internal fluxes (moving phosphorus around the ocean) but also the fluxes into and out of the ocean as a whole.

The phosphorus cycle model has not been published separately, though it is a key component of the nitrogen-phosphorus and silicon-phosphorus models.
Tyrrell, T. (1999). The relative influences of nitrogen and phosphorus on oceanic primary production. Nature 400, 525–531.