What even is mobilisation of a research ship?

Mobilisation. Mobilisation is the loading of the ship, getting everything unpacked and set up.

What does that even mean? People do not talk about it or show photos of it, but it is the most important part of the cruise. The mobilisation is the preparation stage. A research cruise is not just about watching fulmars soar along the ship or just simply collecting scientific data. Even though we wish it were that simple, there is a lot that needs to happen before we download and analyse the data.

Within the preparation stage there are usually hundreds of emails flying arounds, this year it was all about the virtual teams’ meetings, spreadsheets, paperwork and packing. Packing is one of the most important items on that list because to forget something could be catastrophic to the cruise program. 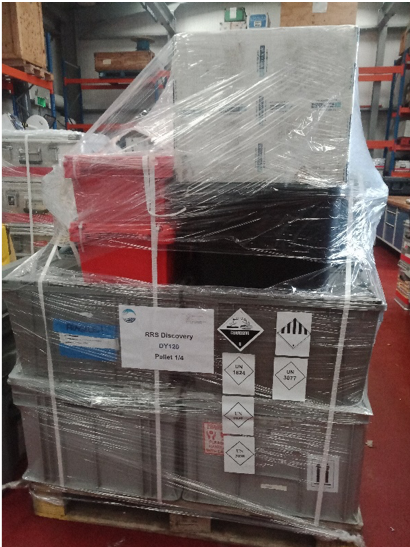 Packing is not simple either, there are road and shipping rules to comply with, from the type of box, to the labelling and the spreadsheets. If any part of that is wrong, then the equipment will not reach the ship. When the kit and the different teams arrive at the ship the full mobilisation beings!

However, this year is not a normal year. As stressful as it usually is, COVID has increased that tension even further. Everything brought on board needs to be quarantined or 72 hrs, including everyone on board who were all in isolation for a week prior to the cruise and then socially distance for 2 weeks.

So, what are we doing on the RRS Discovery and how are we getting ready to leave the NOC dock? We are a team of scientists, technicians and crew setting sail for the Rockall Trough as part of the OSNAP research programme. OSNAP is an acronym for, Overturning in the Subpolar North Atlantic Program. Led by NOC, UK-OSNAP is a partnership between NOC, SAMS, University of Oxford and University of Liverpool. You can read more here.

To capture the AMOC oceanography that was described by Kristin above, the plan is to monitor the Atlantic Meridional Overturning Circulation. The moorings are deployed within areas of the Atlantic to capture the AMOC. A mooring is a collection of sensors on a wire anchored to the sea floor at fixed location. The sensors range from oxygen, temperature, salinity, nutrients and also a sediment trap. These moorings are on rotation every two years at the moment which fits into the science programme and the life of the deployed sensors. Two years ago, there was a scientific research team on the RRS Neil Armstrong which swapped all of these moorings over for newly calibrated sensors with full batteries.

To help swap over the moorings on this scientific programme, there are 6 scientists from SAMS, 1 from NOC, 7 National Marine Facilities (NMF) technicians from NOC and the usually amount of crew which are 22. Everyone on board has their own responsibilities to do to ensure the ship sails and the science goes smoothly. 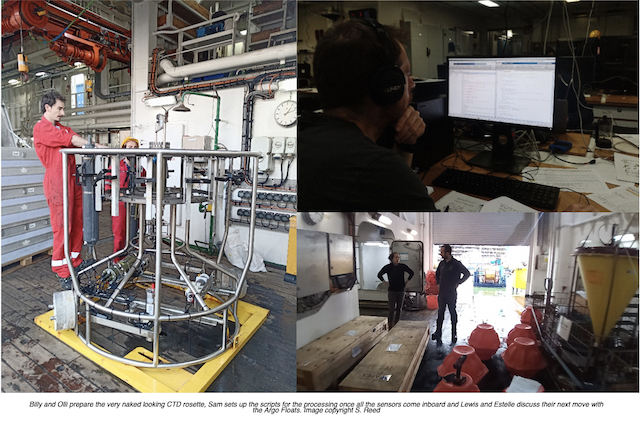 Before we leave the NOC dock a few things need to happen. Firstly, everything is craned on and unpacked, the next stage is to set up and check that we have everything onboard. The crew busy themselves getting all the ships systems ready including the winches, whilst the NMF techs from NOC prepare the moorings, CTD and the sensors that go with them. The principle investigator who is Stuart Cunningham for this cruise, decides what science happens and coordinates with the scientists and technicians to get everything set up and ready. Stuart also coordinates with the bridge (where the ship is steered from) to decide on the route we will take (as seen below) and what moorings and calibration dips we will do and in what order.

The other part of the set up includes checking the serial numbers of every sensor on board and to check it matches the diagram of the mooring deployment. In addition to this all the sensors that come on board has its data downloaded and analysed. The programming, through MATLAB needs lots of scripts set up to ensure this runs smoothly. The logs need to be prepped. The moorings are also wound onto the winches in preparation for deployment, including getting some of the kit shackled together ready to deploy when we arrive on station. All of this is also a lot easier to do whilst at port instead of trying to do whilst rolling around at sea. 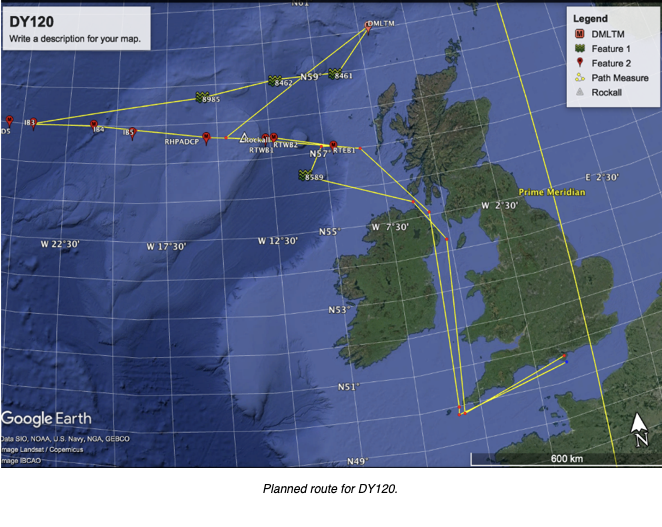 Once we set sail, the first plan is to do a test CTD at the lizard then we head to our first mooring turnover at EB1 on the Rockall Bank. At the end of September, we launched a sea glider from SAMS near Tiree (Inner Hebrides) and is programmed to head for EB1, it will be logging data like salinity, temperature and depth in a sawtooth like profile across the Atlantic. The race is on, who will arrive at the station EB1 first, the RRS Discovery or the wee seaglider? Follow the race on twitter.