A brief overview of the JC191 Expedition

The RRS James Cook departed from Fort Lauderdale (Florida, USA) to Tenerife (Spain) in the early morning of the 19th of January 2020. With it, the JC191 expedition began its goal of completing a full depth hydrographic section in the subtropical North Atlantic Ocean.

As part of the Climate Linked Atlantic Sector Science (CLASS) research programme funded by NERC, and as a UK contribution to the Global Ocean Ship-based Hydrographic Investigations Program (GO-SHIP) a group of 17 scientists and 4 technicians of 8 different nationalities and 10 participating institutions (led by the National Oceanography Centre), have headed to remote oceanic waters to carry out a total of 145 stations over 4000 miles and 42 days.

Each station will collect continuous data and discrete water samples from the sea surface to the ocean bottom for currents, temperature, fluorescence, salinity, dissolved oxygen, dissolved inorganic and organic nutrients, total alkalinity, dissolved inorganic and organic carbon, methane, methane carbon isotopes, radiocarbon, and particulate organic matter. As well as being analysed on board, some samples will be returned to land for analysis there.  Additionally, underway water measurements of pCO2 and alkalinity will also be made. 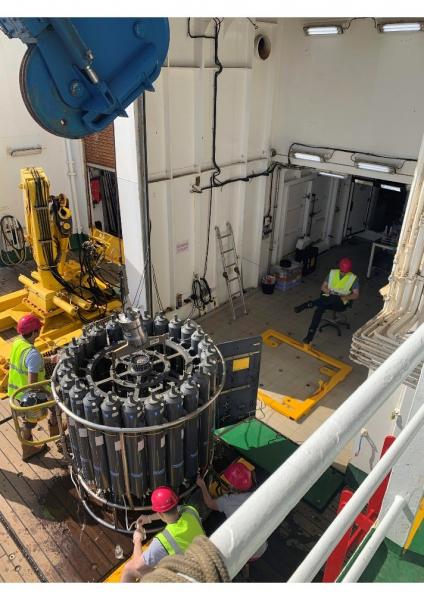 This research will document the physical and chemical changes occurring in the ocean; this monitoring of ocean health is critical in revealing the extent to which subtropical waters have warmed and become more acidic through the absorption of anthropogenic heat and carbon from the atmosphere. The subsequent calculation of the transport of carbon and heat by ocean circulation are then essential in better understanding how the ocean is responding to a changing climate, so as to inform on how it will behave in the future.