Sensor deployments during a pandemic

Work package 6 of the CLASS project revolves around the development and demonstration of new sensing systems for autonomous ocean measurements. Two of these sensors – those for pH and total alkalinity (TA) – have been used during the Covid pandemic, despite our not being able to travel to join our collaborators. In both projects, the sensors were used to support studies in rapidly-varying coastal ecosystems, demonstrating their value as alternatives to high-frequency manual sampling.

For the first project these sensors were deployed in seagrass meadows near Ischia, Italy. The project, called “The effect of ocean acidification on seagrass community metabolism”, was led by Dr. Dirk Koopmans of the Max Planck Institute for Marine Microbiology (Germany) and hosted by Dr. Ulisse Cardini at the Stazione Zoologica Anton Dohrn (Italy). They and their colleagues deployed NOC’s pH and TA sensors to accompany an eddy covariance system, which is capable of measuring fluxes of oxygen in and out of the seagrass meadow. This fieldwork was supported the EU Transnational Access program “ASSEMBLE-PLUS” (grant number 8205). 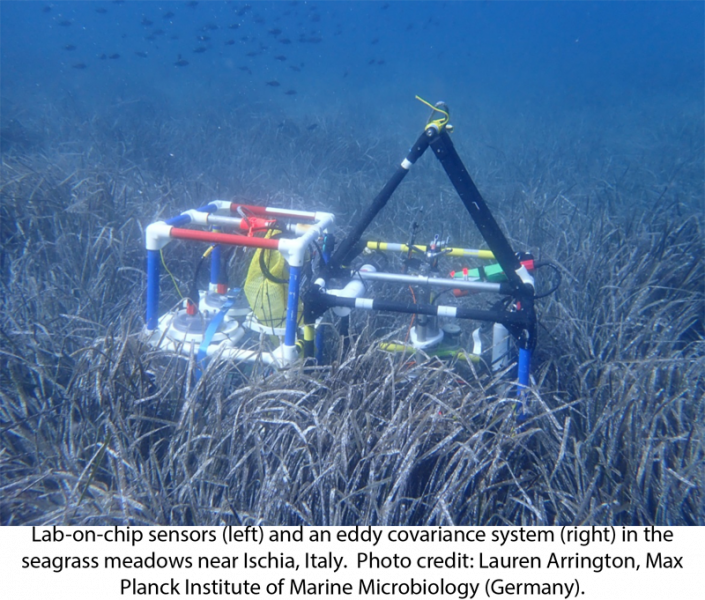 Seagrass meadows may serve as a naturally-occurring coastal refuge against acidified ocean. The region around Ischia has natural seeps of CO2 from below the seafloor, acidifying the local seawater and making the site a perfect test bed for studying future ocean acidification scenarios. The project examined the interplay of the seagrass productivity, the carbonate chemistry in the surrounding water, and the organisms that live on and around the seagrass.

The second project was led by Kay Davis at Southern Cross University (Australia). She used the NOC’s TA sensor in the Great Barrier Reef. At her field site, the reef is isolated from the open ocean during low tide, and measurements of the local water chemistry offer insight into the coral reef productivity and calcification rates. By collecting this data in various reefs at different times, she is gaining insight into the health and resilience of reefs.  She has previously done similar studies in other regions by using intensive manual sampling. This project highlighted the benefits of autonomous technology, which can be left in situ to take measurements at a higher frequency than is practical for manual sample collection. This allows her to account for dynamic and rapidly-varying environmental conditions. 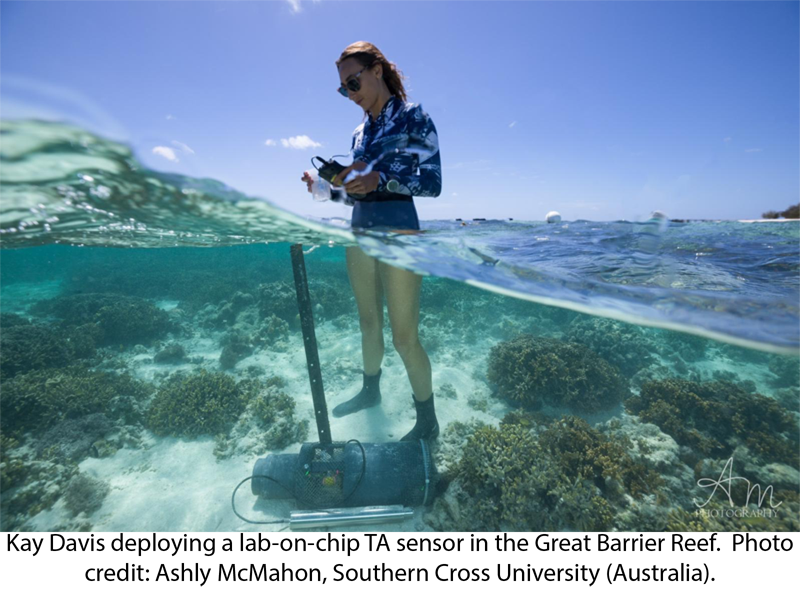 We are grateful to our collaborators for undertaking such exciting and important fieldwork during these difficult times, and for their willingness to master new technology with remote training and support coming from a different zone! For those of us in the CLASS project, both deployments were a fantastic opportunity to test and demonstrate this new technology in scientifically important applications.