A Round up of Discovery DY120

A Round up of Discovery DY120 from the Chief Scientist, Stuart Cunningham, Scottish Association for Marine Science (SAMS)

DY120 set out to complete work for the CLASS and UK OSNAP programmes, on a cruise that had been delayed from its original August 2020 dates because of the covid-19 restrictions. We had factored in some contingency time in case the weather was bad, but still some nervousness about whether we could complete the work in October, typically a very windy month, remained.

The main objectives of the cruise were to turnaround six moorings (3 in the Rockall Trough and 3 in the Iceland Basin) that had been in the water for 27 months, deploy one new mooring in the Rockall-Hatton Basin, and to recover a mooring in a cold-water coral region near the Wyville-Thomson Ridge.

I am very pleased to report that we have successfully completed all our mooring turnrounds. We also installed a new mooring at 57° 36.89’N , 15° 24.66’ W, 1083m. This location is the foot of the western flank of the Rockall Plateau where we had previously mapped a jet of the NAC using glider data. The mooring will enable us to analyse how the western and eastern Rockall currents are connected.

Data return has been exceptional: only one instrument stopped logging after a fortnight, and we had one or two instances of fouling. Otherwise all records are 27-months long, even though this is the longest I have left instruments at sea. The plot below shows gridded temperatures in the eastern Rockall Trough – an astonishing 6 years of data from a series of mooring deployments in the same location. The success of the moorings is testament to the skill of the people who designed, built and deployed the moorings - a team effort from NOC and SAMS staff.

I’m pleased with our moored oxygen and pH measurements, particularly pH. The DeepSeapHOx instrument seems to have worked well and continuously for nearly 600 days, the maximum basically we could squeeze out of the batteries. These with the carbon, oxygen and nutrient sampling will extend our calculations of carbon fluxes in this part of the array. We tested new carbon and pH sensors integrated into the CTD package but that was less of a success because some sensors failed.

The ships’ CTD winch is now fitted with Active Heave Compensation – which works by using a motion reference unit to measure ship motion then make a prediction of ship motion 10s ahead. The winch then pays in and out to compensate. It works and is really amazing to watch it in action. I have been very pleased by the impact this has on our CTD data, with general improvement in lowered CTD data quality and you really see it at the instrument calibration stops.

Below is a representation of our glider missions for UK OSNAP and CLASS, since 2014. It is an extraordinary and innovative achievement to have six years of nearly continuous glider missions observing the eastern boundary currents. This year we have been focussing on repeated crossings of the Scottish/European Slope Current which sits near the continental shelf break. These missions are going very well (latest glider was launched in September). They are providing the slope current properties and transports every couple of days or so. I hope we can demonstrate this is a successful alternative to moorings in this highly fished zone. 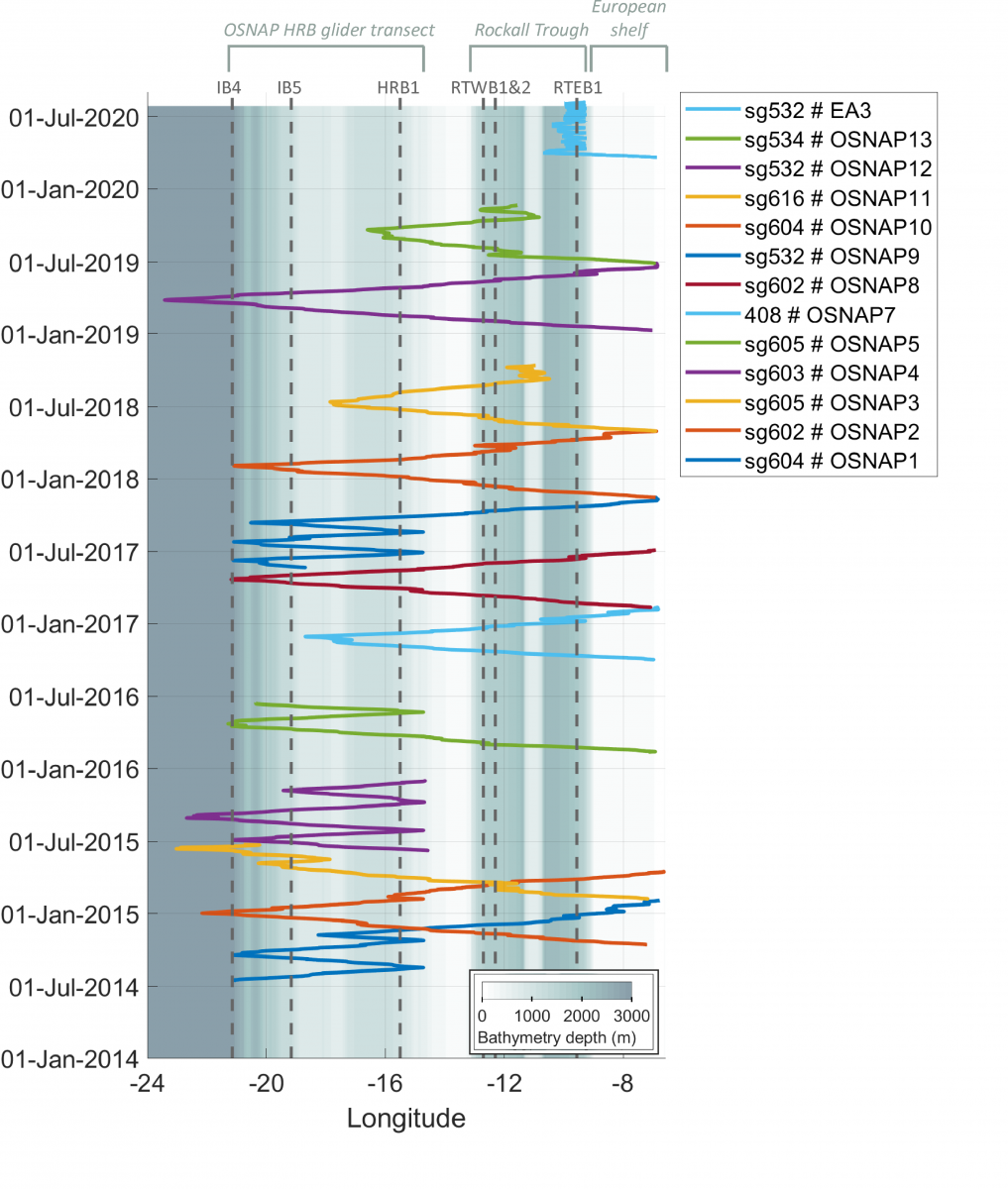 We have been very lucky with the weather. Calm (for this part of the world) and lots of sunshine – though a bit chilly. In the last week of the cruise we were running ENE from the middle of the Iceland Basin ahead of a big storm. Then we ran for shelter behind the Outer Hebrides because of the forecast of 45 knots and 8-10m swell. On the plus side that meant we sailed down through the Inner and Outer Hebrides – the most beautiful place in the world for sailing. And as a bonus the ship dropped the SAMS scientists off as we sailed past the SAMS lab: we went ashore by small boat transfer, saving a week sailing back to Southampton, de-mobing then a 14 hour bus ride home!