I had the privilege of spending February and March on board Germany’s famous icebreaking research vessel Polarstern in the Weddell Sea, Antarctica. Organised by the Alfred Wegener Institute for Polar and Marine Research (AWI), the Continental Shelf Multidisciplinary Flux Study (“COSMUS”, expedition PS124) was a truly interdisciplinary study of the region. The big overarching theme was fluxes: fluxes of water masses, ice, nutrients, carbon, and various living organisms into and out of the Weddell Sea, and from the surface to the water column and the benthos.

My own role on this expedition was to deploy some of the autonomous lab-on-chip sensors that are developed at NOC. Specifically, I brought sensors for measuring carbonate parameters (pH, alkalinity) and nutrients (nitrate, silicate). More details on the technology can be seen here. The carbonate sensors are being developed through work package 6 of the CLASS project. The measurements they did on the cruise will contribute to CLASS work package 1’s goal of collecting data on the ocean carbon cycle. 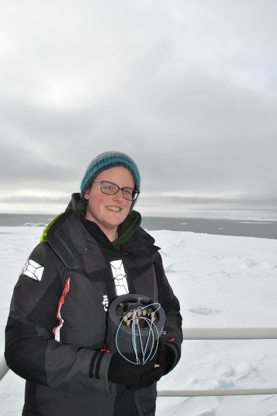 On this cruise I deployed these sensors on a number of different platforms (see below). They formed part of a seafloor lander, to study fluxes into and out of the seafloor. I also used them on the ship’s surface water underway system, to study the interactions between the atmosphere, the water biogeochemistry, and the phytoplankton living in this water. Lastly, towards the end of the expedition, some of the NOC sensors joined several commercial instruments on a mooring, to make measurements of the productivity of the region even during the many months when the area is inaccessible by ship.

We also had a very special unplanned opportunity on this expedition: a large new iceberg, called A74, broke off from the Brunt Ice Shelf while we were nearby. We seized the chance to go study this newly-accessible environment by circumnavigating the iceberg and studying the seafloor and water column behind it.

The new iceberg, A74, viewed off the aft of the ship while we sailed through the gap between the ice shelf and the iceberg.