For about ten years NOC has collaborated closely with the Met Office under the Joint Marine Modelling programme (JMMP), which forms part of the Joint Weather and Climate Research Programme (JWCRP). Under JMMP and related programmes, NERC funds researchers to support the UK’s national capability in observing, understanding, modelling and predicting weather and climate, and this work is currently being funded through the CLASS project. NOC’s role under JMMP has been to work, along with the Met Office, on creating and assessing a succession of global and regional ocean configurations: the former constitute the ocean component both of coupled models for climate research (notably participating in the IPCC Assessment Reports and CMIP), and of operational systems such as GloSea and DePreSys that are used for weather prediction on time scales from hours to decades. The standalone ocean and sea ice models, as well as the coupled climate models they form part of, have also been made available to the UK science community as research tools, and have made essential contributions to NERC-funded programmes such as ACSIS and SMURPHS.

The ocean configurations developed under JMMP have all been based on the NEMO ocean model code. The previous version, GO6, was coupled to the CICE sea ice model, and is used in the HadGEM3-GC3 coupled climate model and the UKESM1 earth system model (both of which are participating in the current CMIP6 coupled model intercomparison programme), as well in the Met Office’s latest GloSea5 seasonal forecasting system.

Under CLASS we are developing the latest configuration, GO8, which uses NEMO v4 and the new SI3 sea ice model. This incorporates many improvements in the representation of both the ocean and the sea ice: in the former, changes have been made to reduce spurious mixing and to improve the realism of the Southern Ocean, while in the latter extra processes such as melt ponds have been included. GO8 is available on 1° (eORCA1), ¼° (eORCA025) and 1/12° (eORCA12) grids. GO8 will be “frozen” this summer, along with the GC5.1 coupled model, which will incorporate GO8 as its ocean component, and which is aimed at the CMIP7 round of model evaluations.

A major theme of the development work carried out under JMMP at NOC is on reducing spurious numerical mixing caused by truncation errors in the model, mainly associated with the fixed-depth vertical coordinate (z*) used by the NEMO model. We are working on two strands at the moment: improving the representation of the dense Arctic waters cascading into the North Atlantic over the sills between Greenland and Scotland; and reducing numerical mixing due to internal waves as these move water up and down across the fixed coordinate surfaces. 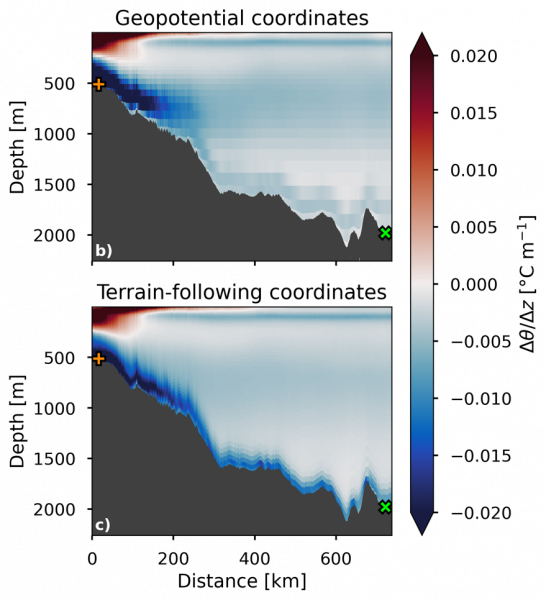 In the real ocean, the very cold and dense Arctic water flows down the slopes downstream of the sills, entraining and mixing with some of the overlying water, but nevertheless maintaining a temperature colder than 2°C. In the model, by contrast, the blocky topography means that the water cascades over a series of ledges, mixing with the surrounding water at each step, resulting in water that enters the North Atlantic a degree or more warmer than it should be. Mattia Almansi at NOCS is developing a new hybrid vertical coordinate for the model that lies at constant depths (“geopotential surfaces”) in the upper ocean, but gradually deforms below 1,000m depth, eventually following the sloping terrain of the sea bed, allowing bottom flows to be much more naturally represented. Figure 1 (right) shows the vertical temperature gradient on a section downstream of the Denmark Strait (between Greenland and Iceland), and shows that the hybrid coordinate simulates the cold bottom plume much better than the default version.

The second strand of model improvement is aimed at tackling the numerical mixing resulting from the vertical motions associated with internal waves and tides. In reality, these simply move water up and down in the water column, only mixing to any significant extent where these waves break. In the model, however, each time a wave carries water across the fixed coordinate surface some mixing occurs, and this results in unrealistic drifts in water properties over time. Alex Megann at NOCS has implemented a new flexible coordinate system called z~ (“z-tilde”), which allows the coordinate itself to move up and down with the waves on time scales shorter than a few days, while reverting to fixed depth levels on longer time scales. This has been tested in simulations with and without tidal forcing, and in both cases it significantly reduces the amount of spurious mixing. Figure 2 (below) shows the instantaneous vertical velocities and level depths at 2,000m with both z* and z~ in the Atlantic, where internal waves with periods between 13 and 16 hours and amplitudes of up to 50 metres per day propagate equatorward. It illustrates how vertical motions from vertical velocities in the fixed z* case are transformed into displacements of the coordinate surface, and also shows that the large-scale temperature biases at a typical thermocline depth in the model (right-hand panels) due to unrealistically high rates of mixing are reduced by almost 50%.