So, I was asked “what is it like working on board a research ship from a crew’s perspective?”

Well, from a completely biased opinion, to put it plainly and simply, amazing! I am Rachel Astell, Third Officer onboard the RRS Discovery, one of two research ships operated the company, facilitating world leading oceanographic science and research all over the globe. I love the career I have chosen and to be in a role helping achieve such significant and pioneering work is endlessly rewarding.  This job has provided me with unimaginable and breathtaking experiences from dodging ice bergs, 64 degrees South, while drinking cups of tea and awing over humpbacks, right up North to Newfoundland, Canada, and near enough everywhere in between. I am 23 years old and find myself grateful near enough every day for the opportunities I have received, and continue to collect through my work. 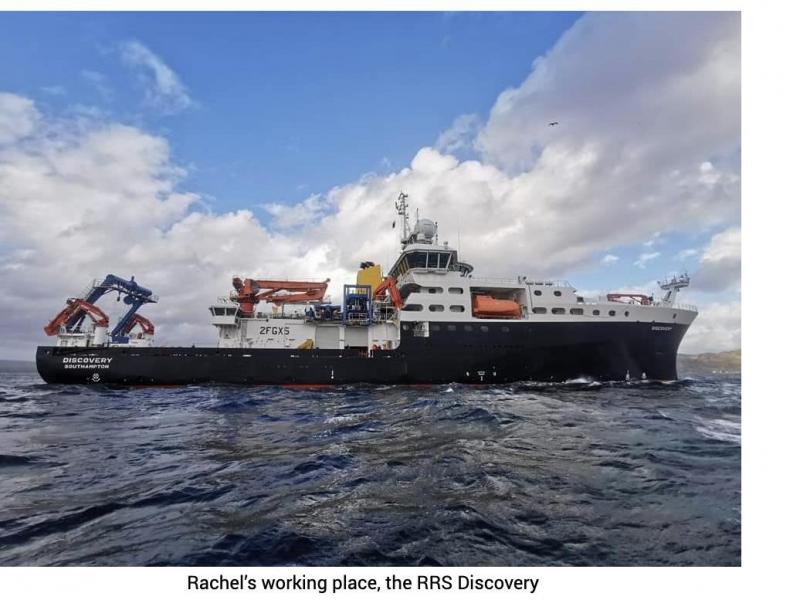 I work for the National Oceanography Centre, who are an independent charitable organisation, providing and supporting worldwide oceanographic science and research with the goal to be seen as the world’s most innovative oceanographic institution by 2025. This is achieved through two research vessels the RRS James Cook and the RRS Discovery as well as a wide range of scientific equipment from the National Marine Equipment Pool.

This cruise, the ship’s crew and technicians are joined by a group of brilliant scientists from the Scottish Association for Marine Science (SAMS). The goal is to recover moorings, which have been out for nearly two years, for the international program OSNAP. This is a transect of moorings streaming across the Sub Polar North Atlantic from Labrador, Canada all the way to the West of Scotland via Greenland collecting data on the Atlantic Meridional Overturning Circulation (AMOC). The SAMS scientists are responsible for the most Easterly section of moorings and have chartered our vessel to recover the currently deployed mooring and then redeploy new ones in their place to continue collecting data.

As one of three Deck Officer’s I take the navigational watch on the ships bridge from 0800-1200 and 2000–2400 everyday and while I am the officer on watch the safe navigation of the vessel is my responsibility. Our vessel consists of two stern azimuth thrusters, a retractable bow azimuth thruster and a bow white gill thruster. The amalgamation of all these thrusters working together gives the vessel extremely accurate 360 degree manoeuvrability and this combined with our Dynamic Positioning system allows the vessel to remain fixed in a geographical position.

The recovery and deployment or moorings and oceanographic instruments to full ocean depth using our sophisticated winch systems that we have done on this cruise required a healthy amount of ships handling and manoeuvring, something that makes working on a research vessel so interesting and different from other sectors of the shipping industry.

A brief run through of the mooring recovery and deployment process from my view on the bridge is as follows;

The vessel is stopped in full Dynamic Positioning (DP) auto position 500m directly downwind of the moorings anticipated position. From here the technicians ping the acoustic release on the mooring and track its ascent to the surface. A keen lookout is maintained by the Captain, Officer of the watch and scientists to observe the mooring surfacing. Once the whole mooring has surfaced and is streaming nicely I begin manoeuvring the ship closer towards the recovery line (under direction from the Captain) at around 0.5kt to 1kt, ensuring every part of the mooring is streaming away from the vessel on the starboard side. At this stage it is important to be conscious of the wind strength and direction while also considering the sea state and direction of swell. We always set the vessel head to wind or sea to maximise comfort and reduce load on the engines, ultimately reducing fuel consumption. Once the recovery line is within 10m from the ships side the deck crew will grapple the mooring and attach the hook. Having successfully secured the recovery line the deck crew will begin dragging the mooring to the aft deck. At this stage the starboard stern propeller is disengaged to prevent any chance of entangling the mooring wire. When the mooring is attached to the winch on the aft deck and the mooring is streaming astern I can engage the starboard thruster and keeping the ship moving slowly ahead so the mooring can begin to be recovered. During this time, safety is imperative. Appropriate PPE must be worn by everyone on the deck and situational awareness of the crew, the ship and our surroundings much be maintained at all times.

Deployment of a Mooring:

The scientists will provide me with a plan outlining the target position, fallback distance and the deployment time. From here I will calculate an appropriate distance to set up the vessel in full DP auto position. Again, directly downwind at the calculated range I will start to manoeuvre the vessel using a range and bearing position shift at a speed of around 0.5kts. Once moving ahead the deck will ask permission to commence the mooring deployment which will be granted provided safe to do so.  Keeping the deck informed of the run distance, they will continuously pay out wire, stopping to attach the individual buoys and sensors as it is being deployed. It is important to maintain communications with the deck as the vessels speed is crucial during deployment. The vessel must be moving ahead at all times but if she is moving too quickly the deck may not be able to attach and deploy the mooring as quickly as the ship is moving. This could result in the ship reaching the anchor drop position before they have deployed all the mooring and would cause us to overshoot the target position.

I could (and do) talk about life on board a research ship forever. Having sailed on Liquid Petroleum Gas tankers and General Cargo ships I can honestly say that nothing comes close. We get to experience and go to places we otherwise wouldn’t be able to, meet new, interesting people every trip, who teach us more and more about our oceans and the changing seas and as a member of the crew spending half the year with the same faces, form great relationships with our second family on board our second home.  So, to conclude, working on board a research ship, from a crews perspective is busy and tiring but more importantly, it’s interesting and absolutely brilliant!