Alongside the programme of fieldwork being undertaken as part of the CLASS project, modelling scientists at NOC are also using supercomputers to make “virtual reality” versions of the World Ocean and its ecosystems.

These computer models bring together our physical understanding of the ocean’s circulation with our knowledge of the major biological processes that take place within it. These processes include the production of organic carbon by tiny plant-like organisms – phytoplankton – in the sunlit surface waters of the ocean, and the consumption of this by the animals – zooplankton – that make up the lower tiers of its food web. Combined with the physical ocean circulation, these processes result in the ocean storing more carbon than simple chemical dissolution would suggest it should. Interactions between ocean physics and this marine biogeochemistry are therefore key to understanding the wider climate system.

While the complexity of the real ocean’s biology is extraordinary, our models of it are simple, and are gradually built-up as we understand more about what’s important. As part of the CLASS project, NOC modellers are “upgrading” the biogeochemistry of our current model, MEDUSA, to allow it to better represent the cycles of both carbon and its most important nutrient, nitrogen.

In the case of carbon, MEDUSA is being revised so that its model phytoplankton can use this element more flexibly and less tightly-coupled to nitrogen. This development has knock-on consequences up the food chain where the growth of MEDUSA’s zooplankton will respond to the resulting balance in carbohydrates (C) and protein (N) in their diet. Rising temperatures under climate change will also affect how quickly model zooplankton metabolise the food they’ve eaten.

As for nitrogen, MEDUSA currently has a closed cycle in which none is added or removed to the model ocean – it just circulates between living, dead and dissolved nutrient reservoirs. However, this simplifies the real situation, where biological processes both actively add and remove nitrogen. In CLASS, the processes of nitrogen-fixation, which adds nitrogen, and denitrification, which removes it, will be added. This will also MEDUSA to properly represent the important balancing act that these two processes play, especially where this may alter under future ocean warming and deoxygenation. 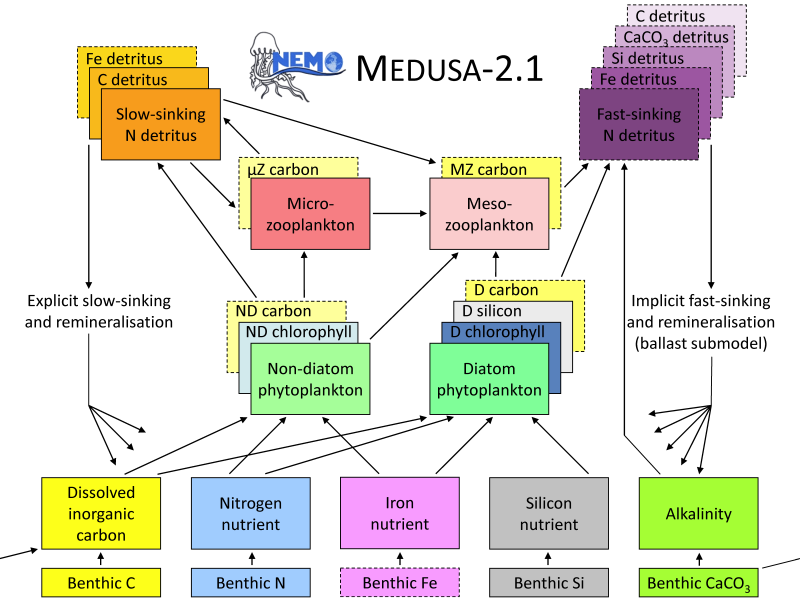 A schematic diagram of the current MEDUSA-2.1 marine biogeochemistry model used in CLASS, showing both its components and their linkages. The model includes the biogeochemical cycles of nitrogen, silicon, iron, carbon, alkalinity and oxygen in a dual size class nutrient-phytoplankton-zooplankton-detritus (NPZD) framework. Components with solid borders are those that we explicitly represent with passive tracers, while those with dashed borders are represented implicitly to reduce the model's simulation cost. The latter components are either linked via rigid stoichiometry to explicit components (e.g. carbon in plankton; this is being upgraded in CLASS) or occur only temporarily (e.g. fast-sinking detritus). Because oxygen is connected to almost every other component here, it has been omitted from the diagram for simplicity

In parallel to these model development activities, NOC scientists working in CLASS are also using the current version of MEDUSA, together with its host physical model, NEMO, to produce new generation of state-of-the-art high-resolution simulations. The basis of these are simulations performed by the UK’s first community Earth System Model, UKESM1, for the international CMIP6 project that feeds into the 6th Assessment Report (AR6) of the Intergovernmental Panel on Climate Change (IPCC).

However, while UKESM1 simulates the whole of the Earth system – using NEMO and MEDUSA for its ocean – it does so at a low-resolution in which the ocean is divided up into boxes of about 100 km in size. In CLASS, a series of ocean-only NEMO-MEDUSA configurations will be used in which the ocean is resolved at finer and finer scales, up to better than 10 km. This will allow our simulations to properly represent the real ocean’s patterns of boundary currents, upwelling regions and important deep water flows, as well as how its biology responds to these. And, guided by the climate simulated by UKESM1, these CLASS simulations will do so across the whole of the 21st century using one of the IPCC’s “shared socioeconomic projections” (SSPs) of a possible future.

These simulations will serve as a resource for both modelling and field scientists to understand how physics and biology interact in the ocean, from the present-day through to the end of the century under this potential future climate. And, in particular, how these interactions are influenced by the fine-scale structure of the ocean. Given that the ocean plays a key role in the uptake of both our fossil fuel carbon and the extra heat that this traps in the atmosphere, it’s critical that we understand how important our model assumptions about the ocean are.

Global-scale ocean biological and simulation modelling in the CLASS project is coordinated by Andrew Coward, Joel Hirschi, and Andrew Yool.