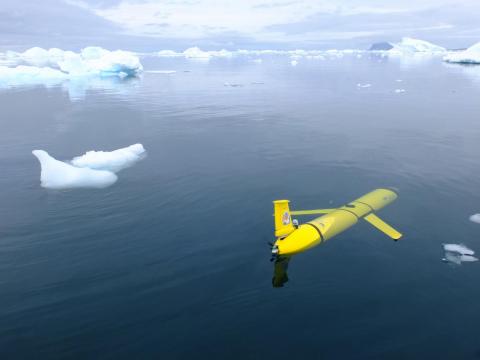 New images released today show the UK's National Oceanography Centre launching a robotic underwater glider from the RRS James Cook marking the start of a four-month mission to investigate the massive A68a iceberg in the South Atlantic. In partnership with the British Antarctic Survey, the Oceanids C2 command-control and data management system is being used to pilot the gliders and process the data.

"We have developed a world leading web application to pilot and manage the data from long range ocean robots," said Maaten Furlong, Head of the Marine Autonomous & Robotics Systems Group, "For this campaign we adapted the software to show the A68a position from satellite data. This allows us to get the glider close to the ice and to take the necessary measurements. These measurements will allow the science team to better understand the impact of the A68a on the local environment and marine life."

Read the full article on the NOC website, or go to the BBC News page for the full media release.