Data from the Polarfront are sent daily. The daily messages contain one sample averaged over a 15 minute period per hour. Some of the data displayed here were obtained by the Norwegian Met Office (DNMI) systems. 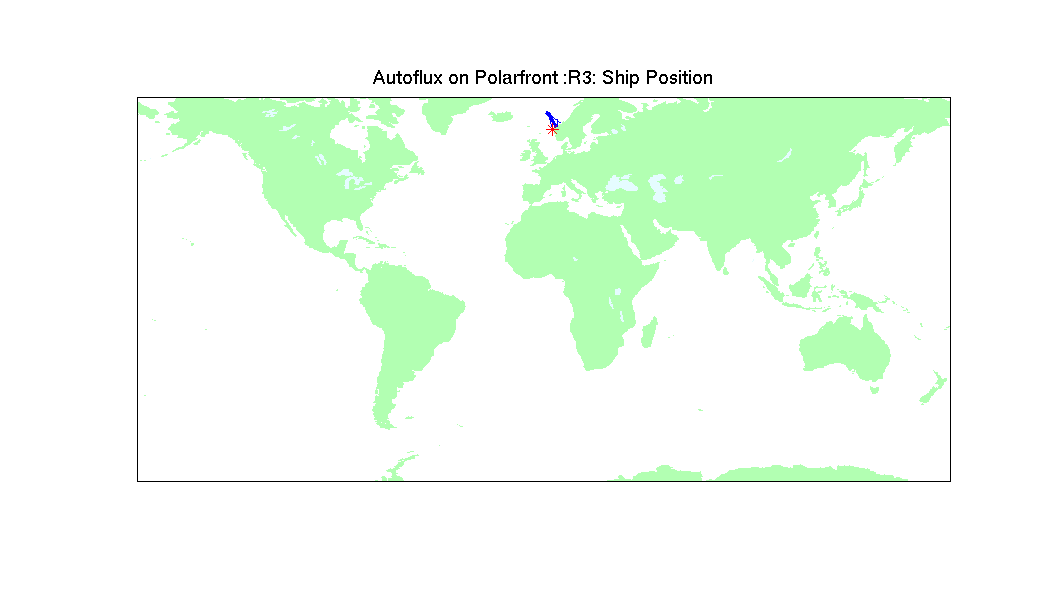 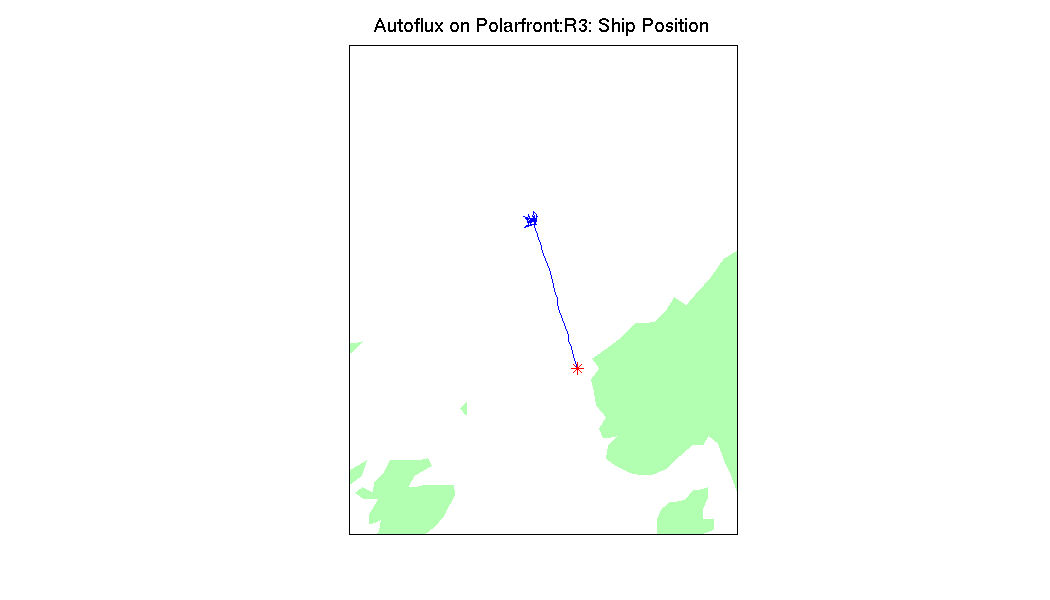 Ship Position The ship occupies Sation Mike at 66N 2E all year round, so the cruise track is not very interesting... 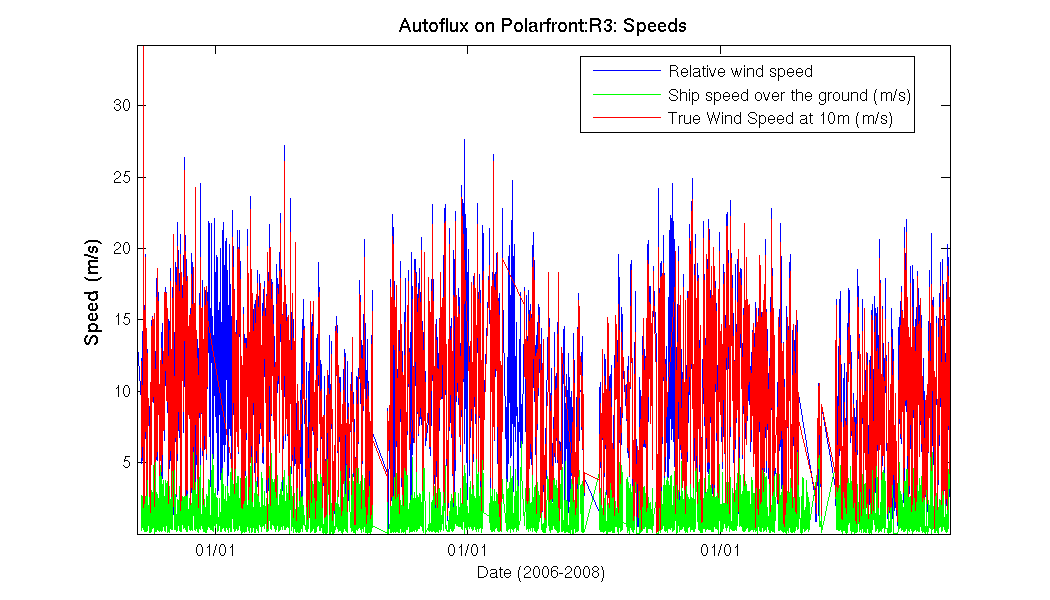 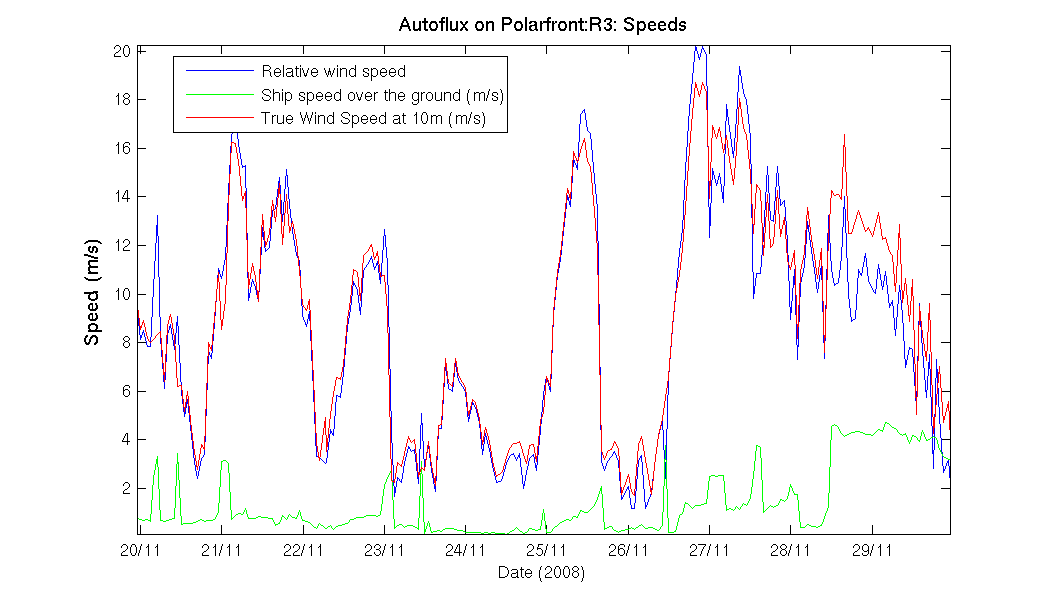 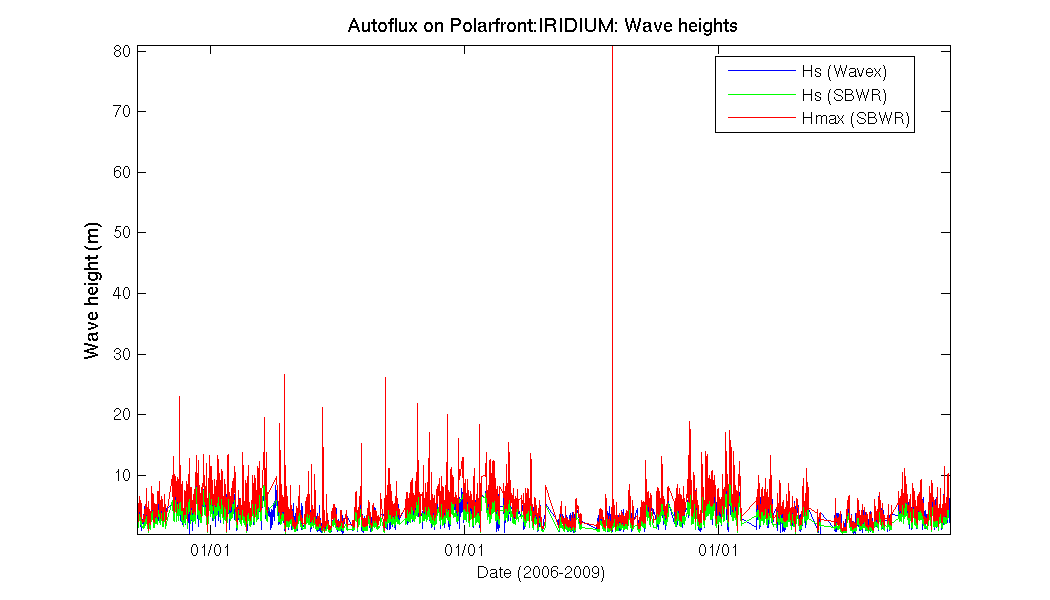 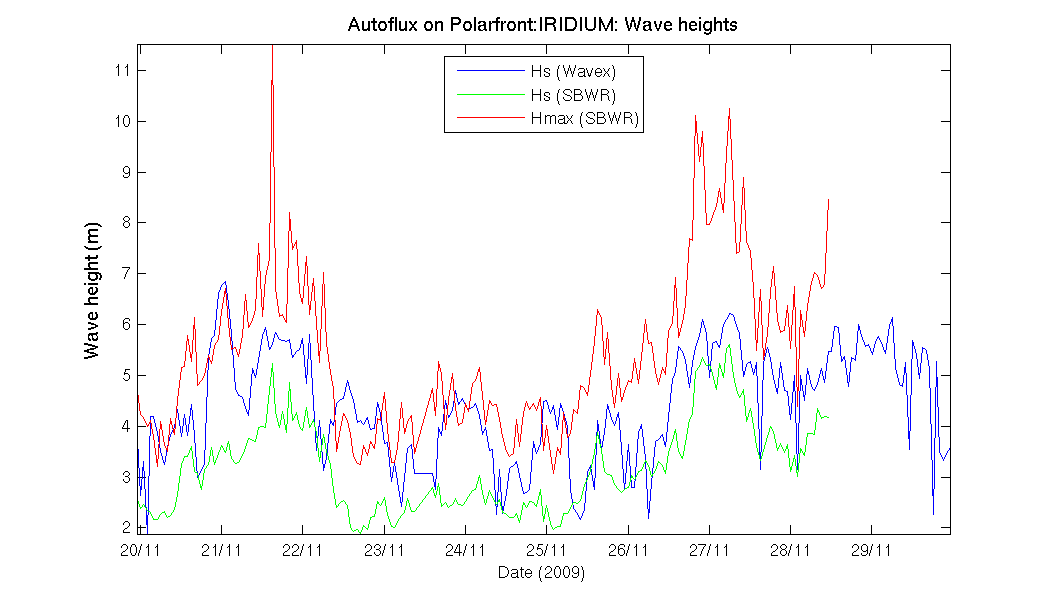 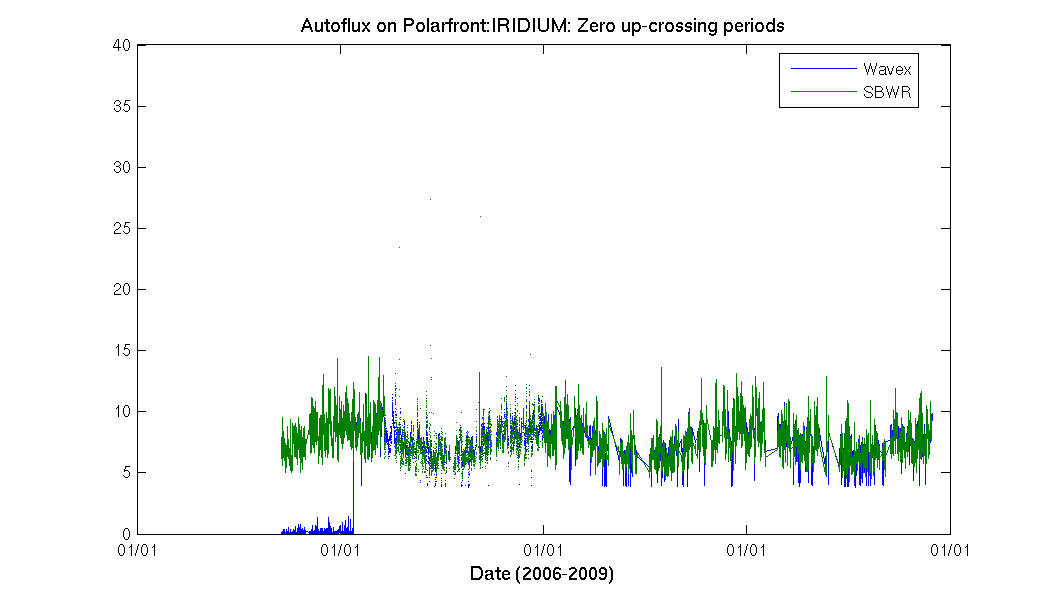 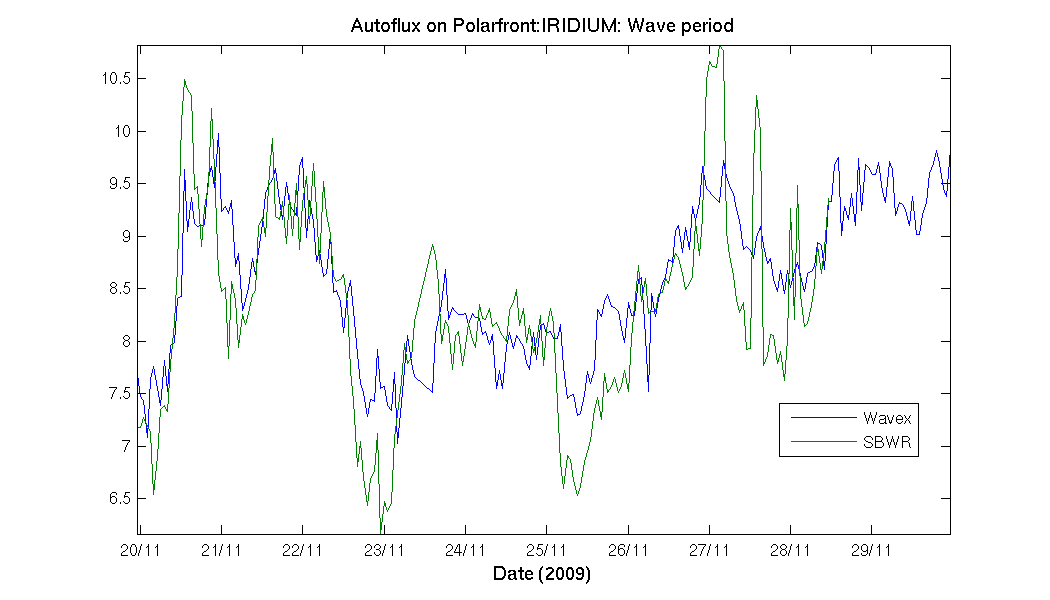 Zero-upcrossing-period (s) Blue - from the Wavex system. Green - from the SBWR. Both calculated from the m0 and m2 spectral moments. NOTE prior to 24/01/07 the Wavex parameters output on IRIDIUM were different, so the periods shown prior to that date are wrong. Also, periods from the SBWR are not corrected for ship speed. 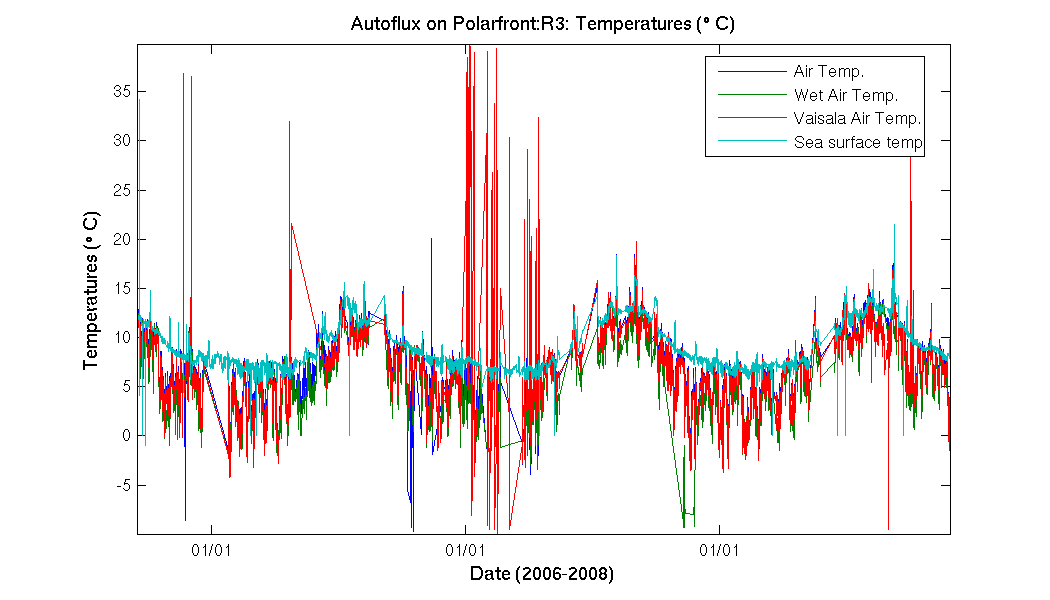 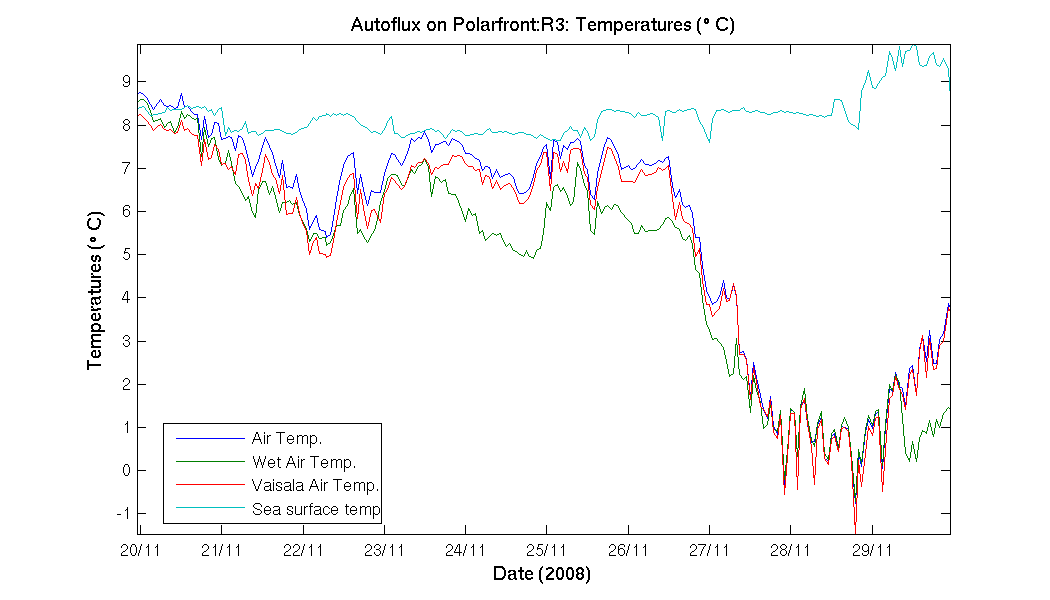 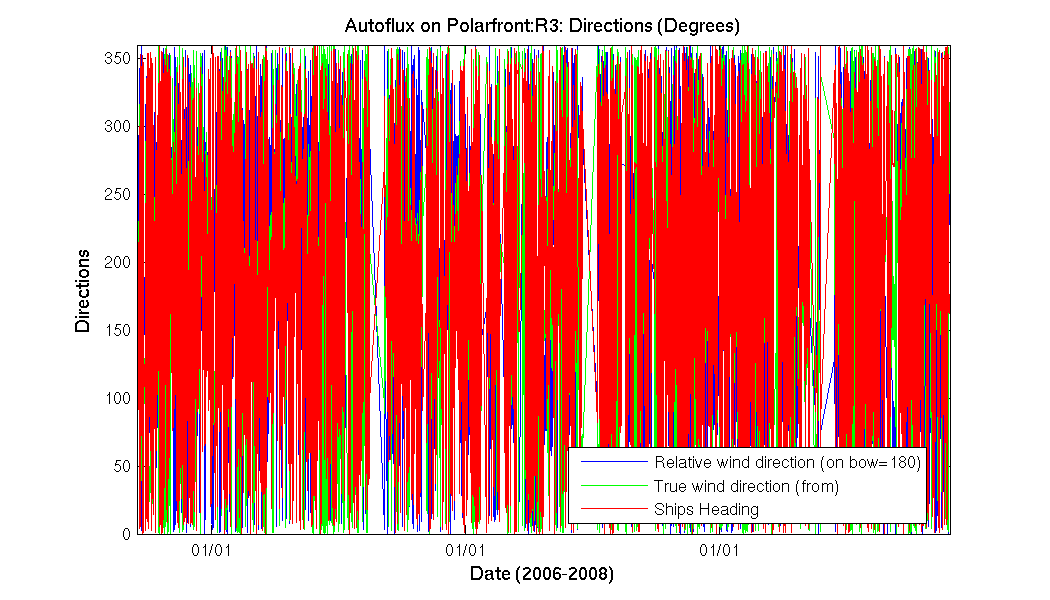 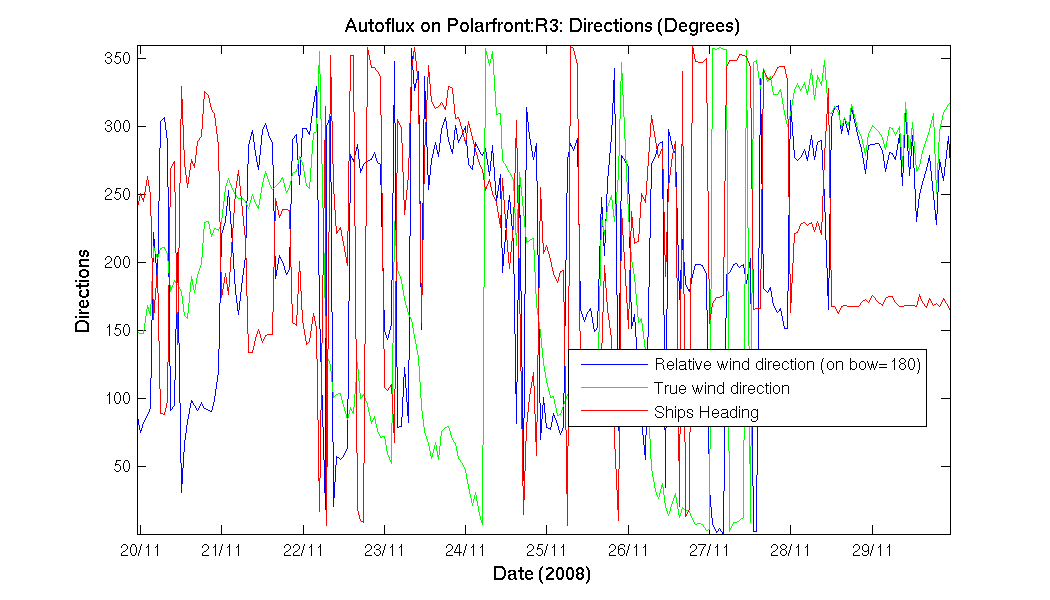 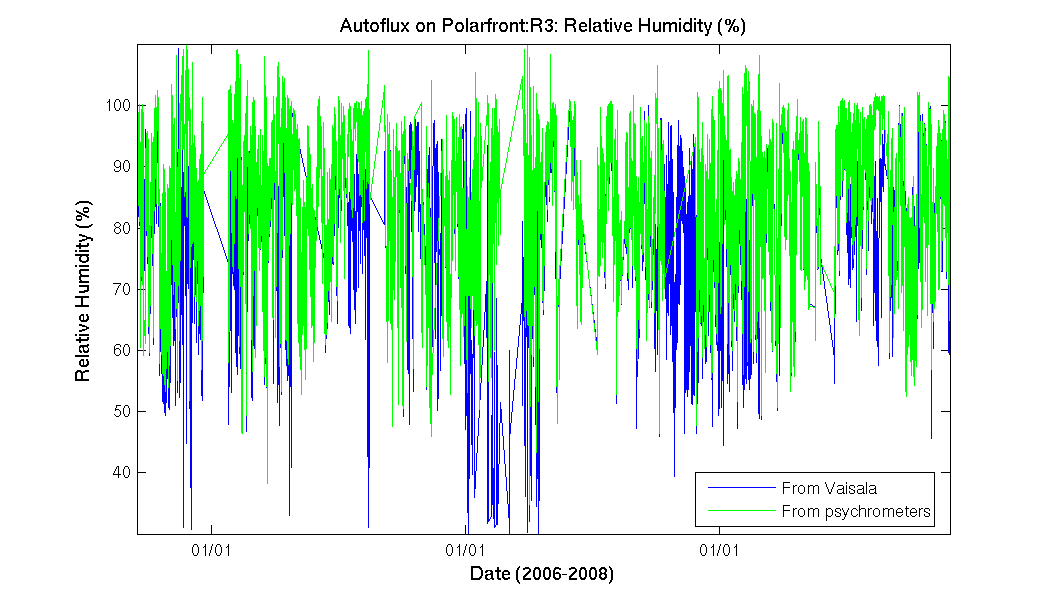 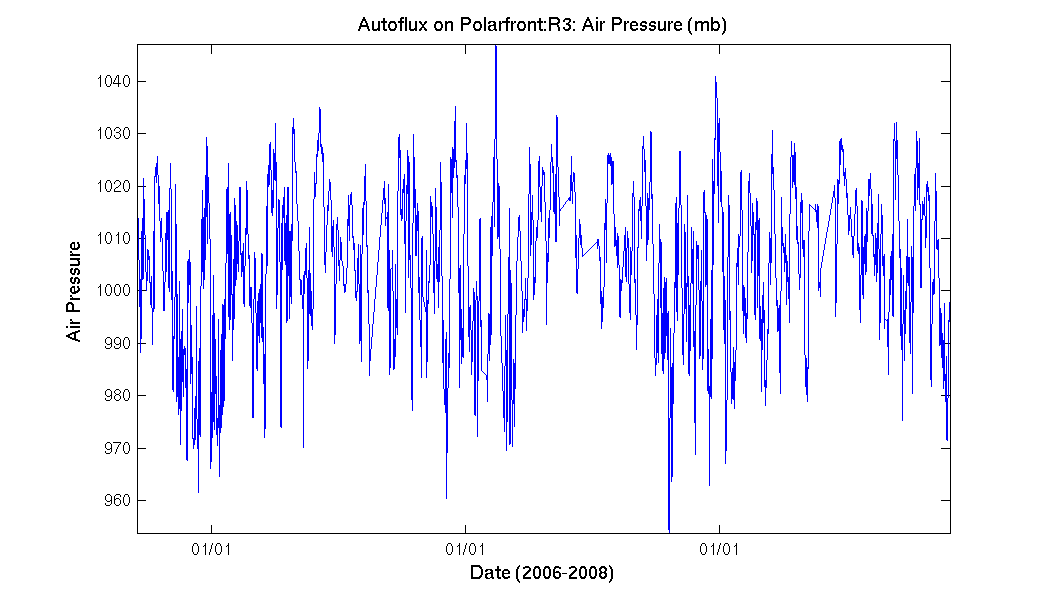 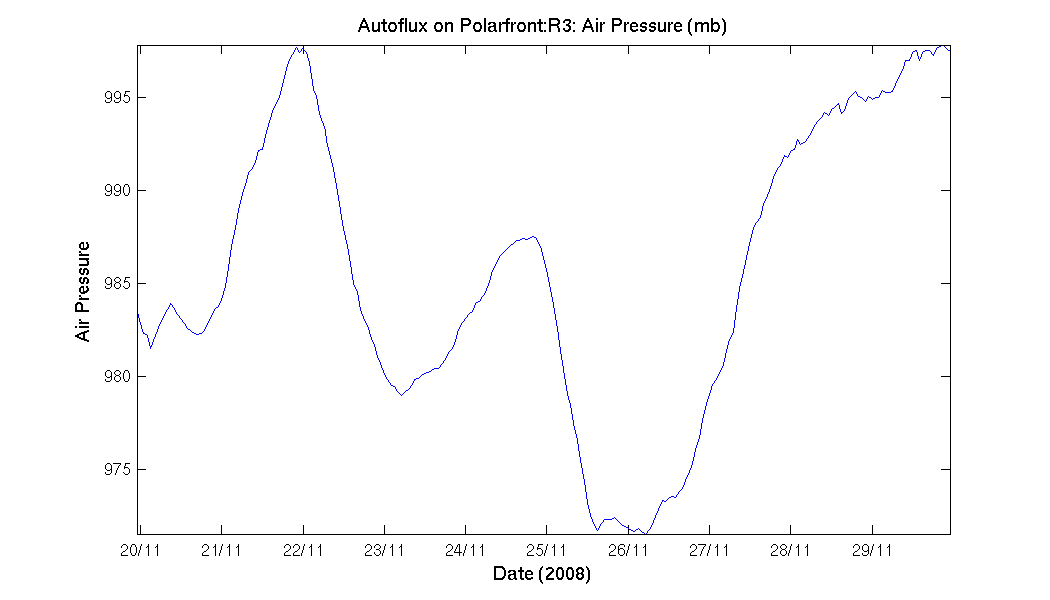 Air pressure (mb) Data from one of the DNMI sensors. 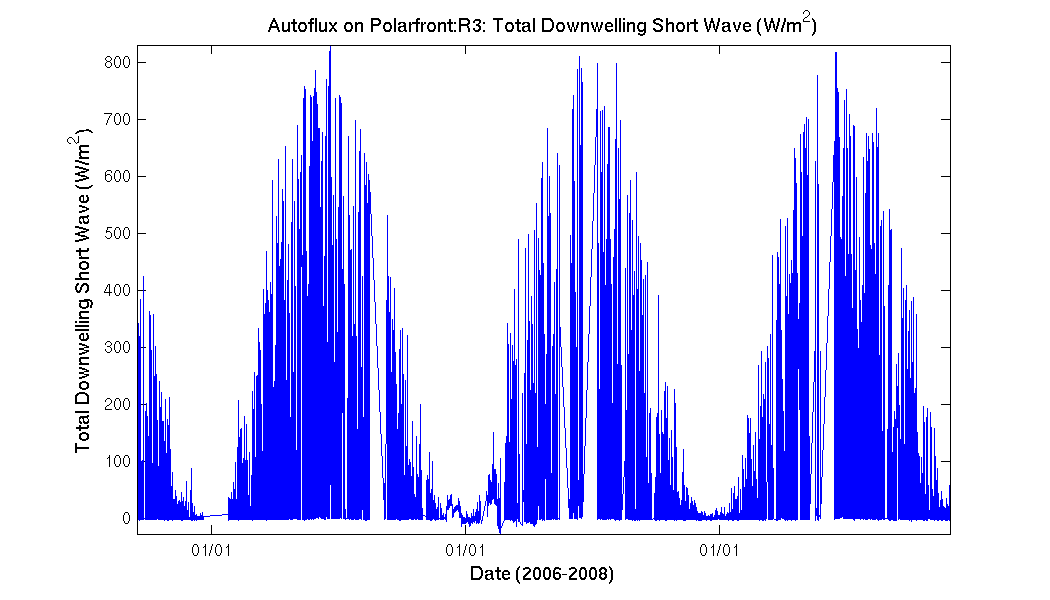 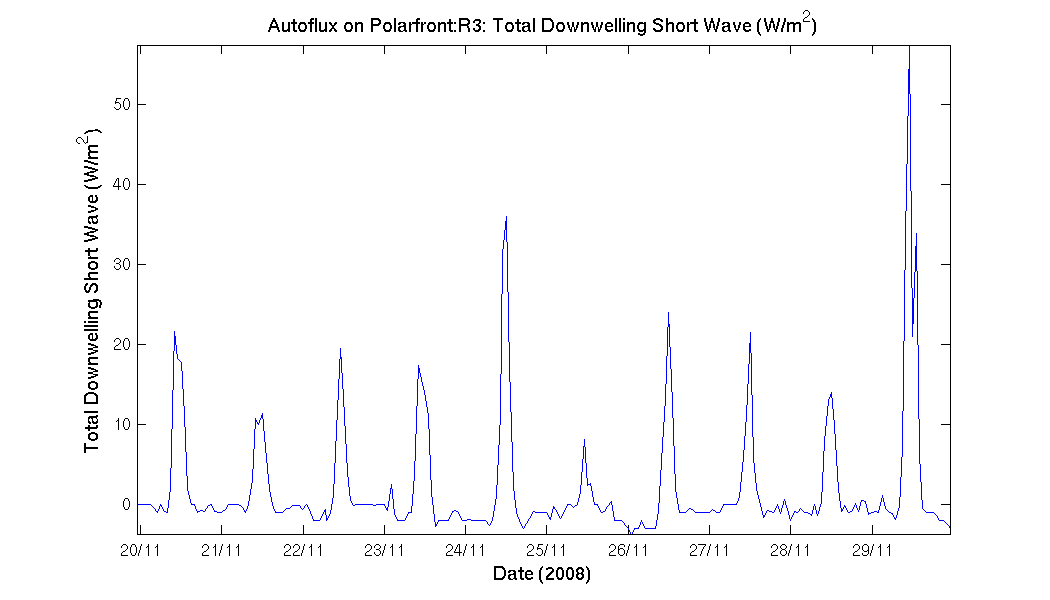 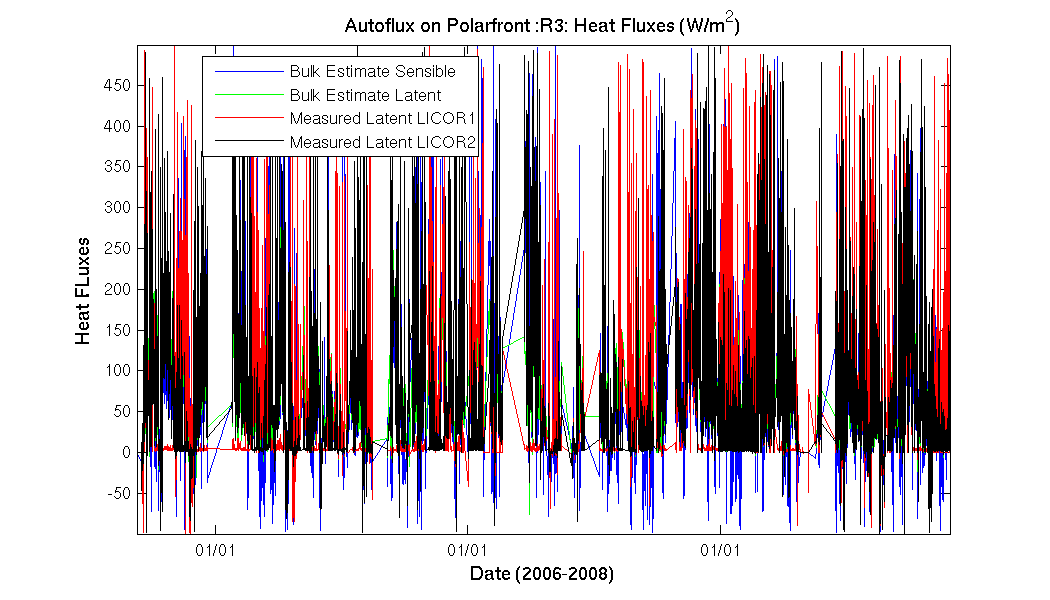 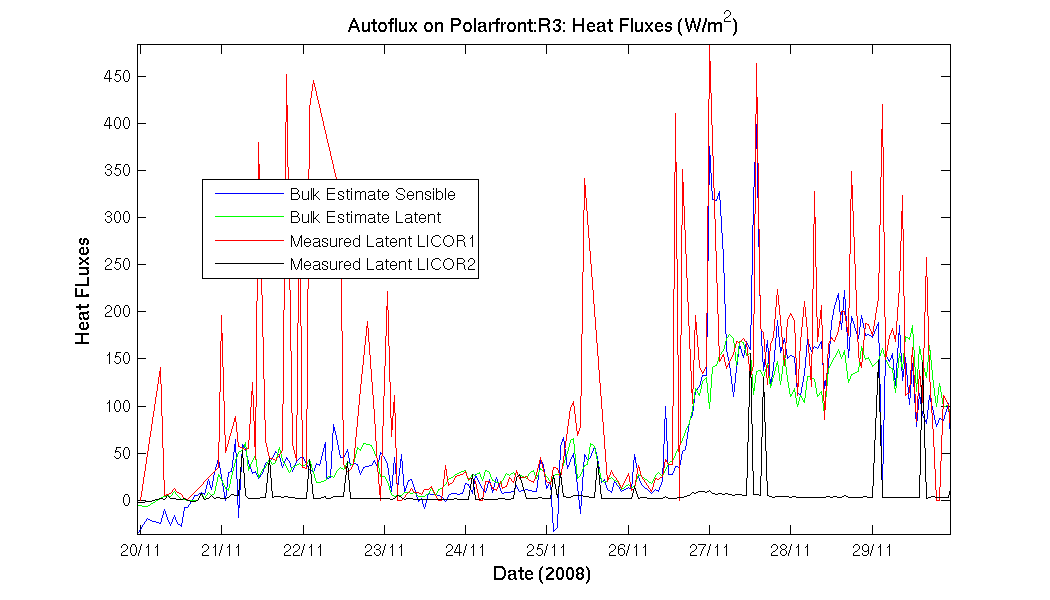 Heat Fluxes (W/m2) Bulk estimates of the sensible (blue) and latent (green) heat fluxes. Latent heat fluxes calculated via the dissipation method are shown for the two Licor sensors. The Licors are shrouded for one cruise at a time in turn - this results in a zero flux being measured. Spikes in the zero flux occur when Licor data are absent for some reason and a bulk value is calculated instead. The shrouded Licor is not working properly at the moment so instead of small ID fluxes being calculated, a default bulk estimate is being used. 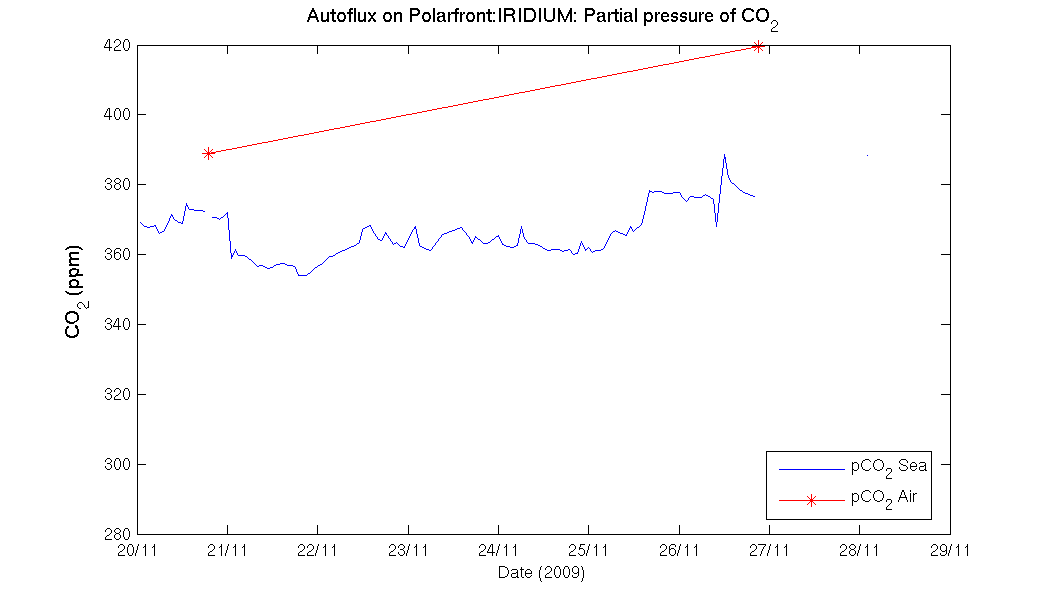 CO2 concentration. Raw underway CO2 concentrations in the surface water from the underway system operated by the Bjerknes Centre for Climate Research, Norway. The large plot shows the last 10 days of data. In some samples calibration standards may be included in the average, causing spikes in the data shown here. Click on the small plot to the left to see all data since the start of the project nearly 2 years ago.