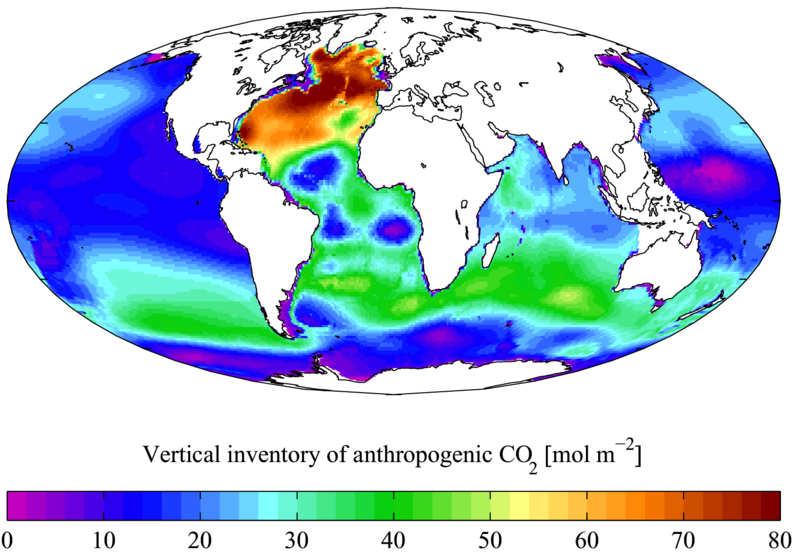 Of the CO2 already emitted to the atmosphere prior to the present day, about half still resides there, but about half has gone elsewhere. Most of the CO2 no longer in the atmosphere has now entered the ocean (causing ocean acidification). A lesser, but still large, amount has fertilised growth of vegetation on land and been taken up into terrestrial biomass and soils. In the future it is suggested that the ocean will continue absorbing CO2 but that the terrestrial biosphere and soils may change from being sinks, as at present, to being sources of CO2. This would exacerbate the rise in atmospheric CO2 and global warming. But how sure are we that the ocean will continue to be an ever larger sponge for anthropogenic CO2? If the ocean were also to turn into a source then this would of course make for even greater trouble.

You can carry out some model tests to examine the sensitivity of the ocean carbon sink to different ways that humans are altering the ocean. As you will see with some experiments, it appears that the ocean is not about to stop being a major sink for CO2. As a start, launch the carbon model and then try doubling the amounts of nutrients (phosphate) flowing down rivers. This is similar to what is actually happening, because fertilisers applied to agricultural land are eventually washed off by rainfall and drain into river which then carry them into the sea.

To carry out this test, first of all run the model with a given amount of fossil fuels. From the main control panel, select the option to ‘Add Fossil Fuels’. Then choose to implement fossil fuels using a simplified sinewave function with a total amount of 4000 Gt C, to be added between years 0 and 400. Click on ‘Apply and Close’ and then open the ‘Set Run Duration and Output Frequency’ panel and set the model to finish at year 200 (we will compare impacts for the end of this century, and assume that CO2 emissions started in 1900). Then click on ‘Run Model’. This completes the default run, in which fossil CO2 has been added to an ocean working as normal. Find out the year 2100 atmospheric CO2 value by clicking on ‘Show Final State’. Write down or remember this number.

Examine the Effect of Increased Nutrients in Rivers

The second step is to repeat the run but with ocean functioning disturbed in some way. In the first instance double river nutrient input. You can do this if you go to ‘Model Parameters’, select the ‘Rivers’ tab, and then double the value for phosphorus (river nitrogen does not act as a fertiliser in the model, it is only included because it has an impact on alkalinity). Click on ‘Apply and Close’ and then ‘Run Model’. If you select ‘Show Final State’ for a second time and compare the atmospheric CO2 value at the end of this run to the value you wrote down earlier, you should see that it does not differ greatly from the value obtained at the end of the default run.
You have demonstrated, assuming the model is sufficiently accurate, that even such a great change as doubling the amounts of nutrients naturally flowing down into the oceans will not make all that much difference to the amount of CO2 in the atmosphere by the end of this century. Remember that the natural level of CO2 in the atmosphere is 280 ppmv, it is currently (year 2008) at about 380 ppmv, and that it is predicted to rise to perhaps 700 or even as much as 1000 ppmv by the end of this century if emissions are not curbed. Changes of just a handful of ppmv are therefore not all that significant in the larger context of these changes.

Examine the Effect of Other Impacts

You can also make other tests of sensitivity of the ocean C sink. A few can be carried out as follows:
try doubling both river nitrogen and river phosphorus.
Global warming is likely to impede vertical mixing in the ocean because it will make surface waters warmer and therefore more buoyant. What effect will this have? Cancel the previous changes (click on ‘Default’ on the ‘Model Parameters’ panel) and then halve the two mixing rates (select the ‘Physical’ tab and halve the values of KSM and KMD).
Ocean acidification could potentially greatly decrease the numbers of CaCO3-using organisms in the ocean. After cancelling the previous change, select the ‘CaCO3’ tab and click on ‘No calcification’.

If you carry out these tests correctly you should find that the rise in atmospheric CO2 repeats inexorably in all runs, regardless (pretty much) of how ocean functioning is impaired or altered. This is the case for changes applied up until year 2100. As ocean changes are applied further into the future the cumulative impacts become greater. But up to the year 2100 there appears to be little sensitivity of atm CO2 to anthropogenic modifications of the ocean.
This at least appears to be the case with this model and with the tests that we applied (see Chuck et al, 2005 for parallel tests with three different sorts of model). There is no guarantee of course that we won't discover some important process not yet included in the model, or discover some way in which the ocean carbon cycle is changing that we had not previously foreseen. But on the whole it seems likely that (1) the ocean will not turn into a carbon source in the foreseeable future , and also (2) the ocean will continue to absorb large amounts of fossil fuel CO2 over the course of the next century, regardless of anthropogenic impacts on ocean functioning.