Recovery from a Comet Impact

There are many impact craters on the Earth’s surface, caused by large comets or meteorites hitting the Earth. On the Moon and Mars, whose surfaces have not been smoothed clean by erosion over the ages, many more impact craters are observed. It has been established to the satisfaction of most scientists that a large impact was the cause of the mass extinction event that took place at the end of the Cretaceous (~65 million years ago), including the demise of the dinosaurs. It is not yet clear whether most of the other mass extinction events that litter Earth’s history were also caused by collisions of extraterrestrial bodies with the Earth.
It is likely that most impacts, especially those on land, throw large amounts of dust and sulphurous material into the atmosphere. This was probably especially the case at the end of the Cretaceous, when the point of impact of the asteroid consisted of gypsum-rich rocks, leading to release of sulphate aerosols to the atmosphere. Ocean ecosystems will have been catastrophically affected not only by the temporary blocking of sunlight (photosynthesis fuels virtually all food chains in the ocean) but also by the extinction of many or most species of plankton.

In this case, as with other shocks experienced by the Earth during its history, several different outcomes were possible:

1) The shock could have caused the environment to enter some runaway spiral to uninhabitable conditions,
2) It could have stimulated a recovery response that tended to bring conditions back towards normal,
3) It could have shifted the Earth to a new stable, but still habitable, state. 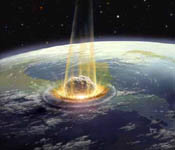 Artist's reconstruction of a major impact event. The collision between Earth and an asteroid a few kilometers in diameter can release as much energy as the detonation of several million nuclear weapons.

Simulating a comet impact in JModels

The JModels can be used to examine some ways in which intrinsic feedbacks in the Earth System could have helped bring about recovery towards previous conditions. The model assumes that marine photosynthesis collapses for a period of 50,000 years following the comet impact, after which it returns to normal. During the interruption, nutrients accumulate in the ocean due to the lack of phytoplankton removal. This may not be completely realistic and may be an over-estimate of the changes that actually took place, but gives a strong test of the ability of the models to recover from massive perturbations. Details about how to run a comet impact simulation in the JModels can be found in this section on model scenarios.