Our four case studies are located in North Wales, North West England and in the east coast of Scotland. They have been selected to provide both similitude and contrast along several dimensions and thus give the opportunity for upscaling and characterising coastal socio-ecological responses more broadly from comparative analysis.

Hesketh Marsh lies on the southern bank of the macrotidal Ribble estuary. This estuary is an important wetland for birds and is designated a Special Protection Area (SPA) for its over-wintering waterfowl, a Ramsar wetland site, and a Site of Special Scientific Interest (SSSI) for its estuary habitats and birds.

Hesketh Marsh was initially claimed in the 1980s through the construction of an embankment and has since undergone two phases of managed realignment: Hesketh Outmarsh West in 2008, and Hesketh Outmarsh East in 2017. Both schemes broadly shared similar fundamental goals to provide habitats and flood protection, even though additional benefits were identified for the 2017 scheme.

The two stages of the Hesketh scheme provide rare evidence of evolution in the policy and planning practice for similar fundamental natural capital objectives and close to identical geographical and environmental settings. Being able to critically compare all factors influencing the decision-making process means this provides a key case study by enabling us to reveal a timeline of change in ‘valuing’ strategic shoreline management decisions.

Traeth Pensarn is a vegetated shingle beach ridge backed by a narrow region of fixed sand and shingle, supporting dune grassland. The area experiences a macrotidal regime and fetch limited waves. The beach was given SSSI designation in 1977 and Coastal Vegetated Shingle is a UK Biodiversity Action Plan priority habitat.

High value assets inland of the beach are under threat from sea-level rise and the area has experienced considerable damage from storms in recent years. Traeth Pensarn therefore fulfils important flood defence and habitat functions that need to be considered in any future development or climate change adaptation plans.

Importantly, hold-the-line policy is now central to the coastal management strategy for Traeth Pensarn throughout all Shoreline Management Plan (SMP) epochs. This site therefore provides a critical contrast within the project in being an example where the high value assets and ecological significance practically dictate an almost unsustainable ‘hold the line’ strategy that receives considerable local support. This site will provide a valuable example to apply the Co-Opt approach to investigate and compare policy specific interventions.

Skinflats and Airth (Firth of Forth)

Skinflats and Airth lies on the south shore of the upper Forth Estuary and is a site of reclaimed agricultural land. Along with perceived wider ecosystem service benefits, this has led to strong policy drivers for managed realignment in the region. However, few schemes have progressed in Scotland.

The Firth of Forth SPA and Ramsar designations are listed for significant European populations of wildfowl and waders, and the Firth of Forth SSSI (7420ha) is an extensive coastal designation comprising of cliff, sand dune, saltmarsh, and mudflat habitats. The site was purchased by the Royal Society for the Protection of Birds (RSPB) as a reserve in 2001 and in 2009 a regulated tidal exchange scheme was constructed allowing habitat recreation for 12ha of saltmarsh with the aim to provide improved habitat for wildlife, and reverse major losses of intertidal habitat in the Forth. This was followed by a managed realignment in 2018 with the aim to improve the ecological function of the site, whilst managing flood risk. The schemes have received varying levels of public support. Key sectors of the population have raised concern about increased flood risk, whilst others have been broadly supportive of environmental objectives.

An important aspect of this case study is that SMPs are not extant for this stretch of the Scottish coast, but statutory approaches to flood management are governed under the Flood Risk Management (Scotland) Act 2009. Through this case study, we will therefore be able to explore the role and importance of national goals for environmental improvement in justifying managed realignment options in the context of wider social acceptability. We will explore trade-offs between environmental improvement, flood risk, and wellbeing, and understand the historical process and factors which have led to the acceptance of managed realignment.

St Andrews Golf Links is home to world famous golf courses. It is bounded by the Eden Estuary and West Sands beach, which has high amenity use, and is inshore of St Andrews Bay, where swell waves are the most significant source of energy.

The Eden Estuary is designated as a Local Nature Reserve and SSSI, and both the estuary and beach are part of a wider designation of Firth of Tay and Eden Estuary SPA and Ramsar. The site is important for common seal, wildfowl and waders, and mudflats, sandbanks, and sand dunes. This case study therefore combines high cultural and environmental significance. SMP policy (Fife SMP 2011) advocates hold-the line policy across all epochs, but for one policy unit managed realignment is preferred to 2030. Because of recent detrimental impacts on the coast (e.g. breaching of the dune complex alongside West Sands), several local initiatives are including restoration projects including Fife Coast and Countryside Trust’s Dune restoration project. 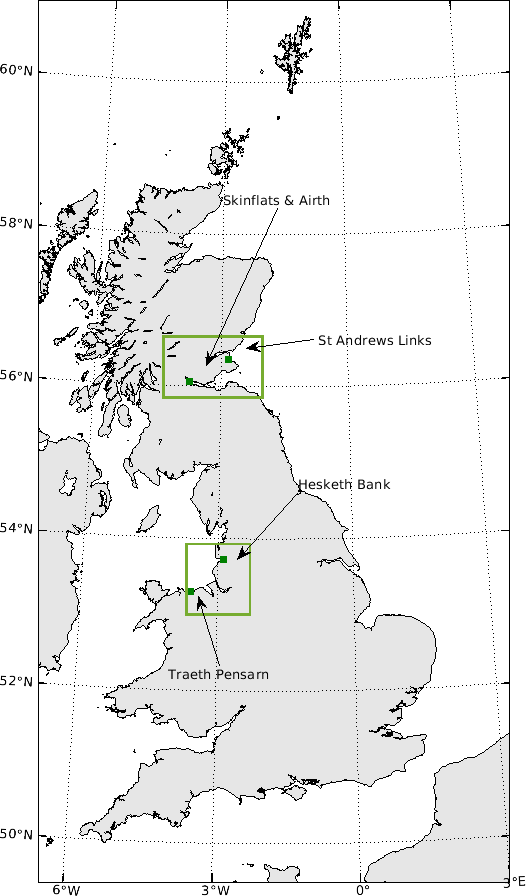 Co-Opt is part of the SMMR programme