Slope currents are a typical feature of eastern ocean boundaries. A jet of water follows the steep topographic contours where the shallow continental shelf drops away rapidly into the abyss, playing a key role in the transport of heat, salt and nutrients away from the equator and towards the poles. The slope current which circles the northwest European continental shelf is an important component of the “ocean conveyor belt”, more properly called the Atlantic Meridional Overturning Circulation, responsible for the region’s temperate climate and shaping its marine ecosystem. However, the shape and strength of the current is changeable in space and time, making reliable estimates of the flow notoriously tricky to measure. So, what propels these slope currents into motion? Although wind can play an important role, there is another less obvious driving force generated within the ocean itself via a physical phenomenon called the Joint Effect of Baroclinicity and Relief, or JEBAR. 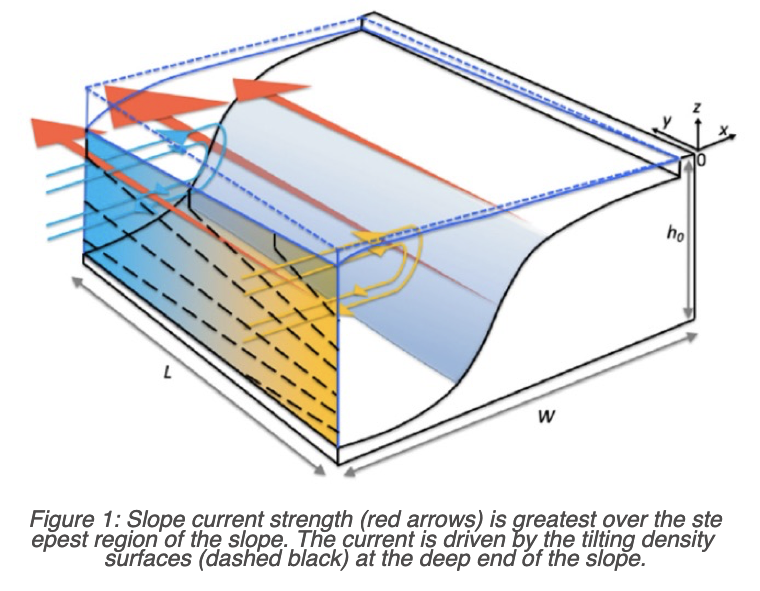 In the open ocean, currents are driven by the uneven distribution of seawater density on large scales. In other words, the surfaces of constant ocean density are not always flat but may tilt, with greater tilt driving stronger currents – heavier water moves under lighter water (and visa-versa), with the direction of movement steered by the fact that the Earth rotates. This tilting of density layers is termed “baroclinicity”. Now consider the case where these tilted density surfaces want to drive a current either into the coast or some prominent topographic feature i.e. some “relief”. Clearly this is impossible and the current has to change direction to avoid the solid earth. Some additional physics is therefore required to describe the situation where large scale “barclinicity” interacts with “relief”, hence the formulation of JEBAR.

Since the term was first coined in 1971 by Artem Sarkisyan, JEBAR has been applied in a variety of oceanographic contexts, both theoretical and applied. The subject has enjoyed a colourful and somewhat controversial history, with disputes over the correct definition of the term and accusations of plagiarism from Sarkisyan towards English-language authors. Critics have pointed out that the JEBAR approach describes only the effect of ocean density distribution on currents, but does not account for the tendency for ocean currents to redistribute density. Nonetheless, JEBAR has become established as an important aspect of ocean circulation, with Sarkisyan declaring "without JEBAR, any modeling of dynamics of seas and oceans is useless"! Much of the original JEBAR research focussed on western boundary currents or other forms of topographic relief. However, a major advance came in 1984 when John Huthnance (NOC) used to approach to evaluate the flow in eastern boundary currents specifically, thus revealing the advanced mathematics behind the climatically- and ecologically-significant flow which borders the northwest European shelf region.

Huthnance, along with collaborators at SAMS, recently revisited the topic he had published on 36 years previous, reworking his equation for flow speed due to the ocean density distribution over the slope. The new formulation makes fewer assumptions about the density distribution and allows for wind forcing in addition to JEBAR. This more general approach makes the equations more versatile and applicable: observational oceanographers can use it to easily estimate of the JEBAR current strength from two or more profiles in ocean density separated by some distance along the slope. The new formulation is also simpler and more intuitive than previously published, so that JEBAR can hopefully be more clearly understood and conceptualised by those without a knowledge of mathematical physics.

The team tested the new JEBAR formulation using the Met Office AMM15 ocean model of the northwest European shelf seas. They selected a relatively straight section of the slope west of Scotland and, by plugging the model density field into the new equations, made a prediction for the slope current speed and structure. This was then compared to the slope current speed predicted by the model itself. Overall, the two agreed closely, both showing a large area of northward flow in the upper water column, with a flow reversal at depth over the deeper part of the slope. Differences between the two indicate that the formulation is still not perfect, and hint and which factors could be incorporated in future to further refine the JEBAR equation. Incidentally, without JEBAR, the diagnosed flow would be just 10% of the value shown – in keeping with Sarkisyan’s view on the perils of ignoring JEBAR!

The team at SAMS have already begun applying this new JEBAR formulation to the slope off Scotland using read-world ocean data. In conjunction with their rapidly-growing collection of SeaGlider observations from the region, and with the increased deep-ocean coverage afforded since advent of the Argo network, it looks as though all the tools are in place to finally uncover the nature of the elusive European slope current.